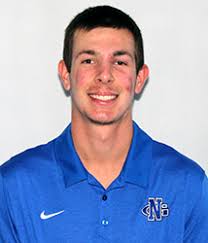 FLORENCE, S.C. – Crews Taylor homered in the sixth, opening up the offense as the University of North Georgia baseball team shut out Francis Marion Friday evening, 6-0, in the Peach Belt Conference series opener.

After Taylor hit his solo shot, UNG was able to double the lead off a Patriot error in the seventh before putting up a four-spot in the ninth.

The Nighthawks loaded up the bases with one out, setting the stage for Jake Arnold to clear the bases on a double to left center, pushing the lead to 5-0. Two batters later, Jake Howard singled through the left side of the Patriot defense to bring the game to its final score.

– Cade Heil (3-0) earned the win, giving up just two hits and two walks across 7.2 innings of work. He fanned eight batters along the way.

– Bill LeRoy had the only multi-hit game, going 2-for-4 at the plate.
– Taylor has reached base in 14 straight games, dating back to last season.

NEXT UP
The two teams will meet again tomorrow with first pitch slated for 2 p.m.