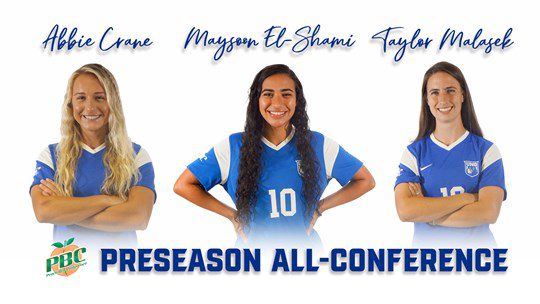 AUGUSTA, Ga. – The University of North Georgia women’s soccer program had three players selected to the Preseason All-Conference team, the Peach Belt office announced Wednesday morning. Additionally, the Nighthawks were picked to finish third in the league standings by the coaches.

A junior forward from Peachtree City, Georgia, Abbie Crane was a first-team All-Conference selection last spring and  was also named to the PBC Presidential Honor Roll, Team of Academic Distinction, D2ADA Academic Achievement Award and a United Soccer Coaches Player of Distinction. In addition to her soccer accolades, Crane was also named All-Conference in women’s track for the 4×100 relay. In the spring season, she scored four goals with three assists in 10 starts, tying for sixth in the PBC in goals and fourth in assists and points.

A sophomore midfielder from Alpharetta, Georgia, Maysoon El-Shami was a second team All-Conference honoree in the spring after first team honors came in 2019. In addition to her Team of Academic Distinction accolade, she was a PBC Honor Roll Gold Scholar and D2ADA Academic Achievement Award winner. In seven games in the spring, she netted a goal with four assists.

A senior forward from Peachtree City, Taylor Malasek was named the PBC conference nominee for the NCAA Woman of the Year and was a first-team All-Conference selection last spring. She was also named to the PBC Presidential Honor Roll, Team of Academic Distinction and the D2ADA Academic Achievement Award as well as a United Soccer Coaches Player of Distinction. Malasek started all 10 games with three goals and three assists, including two game-winners, tying for fourth in the PBC in assists and 10th in points.

North Georgia was picked third behind top ranked Flagler and No. 20 Columbus State in the poll. Georgia College was fourth, followed by Lander and Young Harris in a tie for fifth.

The season kicks off in eight days at UNG travels to Carson-Newman.