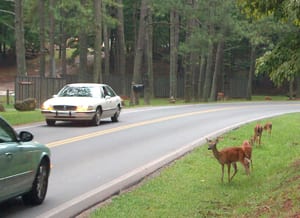 GEORGIA DRIVERS BE ON THE LOOKOUT THIS FALL: DEER-VEHICLE COLLISIONS INCREASE DURING BREEDING SEASON

Athens, Ga. (Sept. 28, 2015) — Fall is prime breeding season for deer across Georgia. It’s also when drivers are more likely to hit deer that run into the road, according to a new study from the University of Georgia.

UGA researchers have completed a county-by-county analysis of when motorists should be more aware of possibly hitting a deer. They looked at breeding data and then compared it to deer-vehicle collision statistics across Georgia.

According to the study, between 2005 and 2012, there were 45,811 reported deer-vehicle collisions across all Georgia counties.

Deer-vehicle collisions increase during “rutting season” because white-tailed deer move around a lot more looking for mates, according to James Stickles, lead researcher on the project. Stickles, who led the study while earning his master’s degree from UGA’s Warnell School of Forestry and Natural Resources, said researchers were able to create a map that more accurately reflects when motorists are in greater danger of hitting a deer. The new map lists specific peak dates for each of Georgia’s 159 counties.

“Now we can warn drivers in a more relevant timeframe than in the past,” said Stickles, who is now assistant deer coordinator for the Florida Fish and Wildlife Conservation Commission.

“Depending on your location in Georgia, peak rut may occur anywhere from October to December,” he said. “By knowing deer movement dates in specific areas, email blasts and other warnings to be more vigilant of deer can be distributed before, and during, times when deer-vehicle collisions are most likely to occur.”

For example, the peak time when deer are on the move in Clarke County, where UGA is located, is Nov. 10-16.

Recently published in the Journal of the Southeastern Association of Fish and Wildlife Agencies, the study analyzed deer-vehicle collisions from 2005 to 2012 and then compared the timing of those wrecks with available conception data, deer movement information obtained from deer wearing GPS collars in Harris County and the old “rut map” from Georgia Outdoor News.

The Georgia Department of Natural Resources is already using the new map created by UGA to inform hunters of peak rut dates. The Georgia DOT is also considering using the map to develop specific motorist warnings for each region.

But there are things motorists should do to avoid hitting a deer, said Bob Warren, a professor in the Warnell School and one of the researchers on the study.

Deer are mostly active from dusk to dawn, Warren said, so that’s when the risk of a deer-vehicle collision is greater.

“Any motorist driving at night needs to be especially cautious because deer will be more active during nighttime periods,” he said. “This is why most deer-vehicle collisions occur early in the morning or late in the evening, because that’s when deer and motorists are both most active.”

Warren said that when he drives at night, he’s diligent about driving at a cautious speed and scanning both sides of the road because a deer can come from either direction. But he also warned that typically, it’s not the first deer that’s the problem.

“Deer are rarely alone,” he said. “If a motorist sees one deer, look for the second one. In many instances, it’s the second deer that crosses the road that gets hit.”

Other researchers on this project include David Stone, Charles Evans, Karl Miller and David Osborn, all with the Warnell School; and Charlie Killmaster from the Georgia DNR. The project was funded by the Georgia DOT.

The map can be found online and downloaded at the Georgia Department of Natural Resources’ website, http://www.georgiawildlife.com/rut-map. 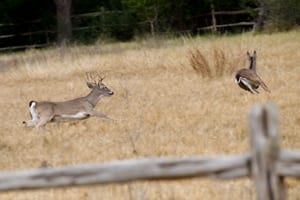 SOCIAL CIRCLE, Ga. (Sept. 28, 2015) Looking for information about the deer rut in Georgia? Be sure to visit the Georgia Department of Natural Resources’ Wildlife Resources Division statewide rut map (www.georgiawildlife.com/rut-map) for information.

“Each fall, a constant question we receive at our office is ‘when is the peak of the rut?’” said Charlie Killmaster, state deer biologist with the Game Management Section.  “Last year, we were able to provide a newly updated rut map to help hunters pinpoint the best times to be in the woods during deer season.”

What is the “rut?”  This refers to the breeding season for white-tailed deer, which can vary at the local scale, especially in areas that experience southern climates like Georgia.  During the peak of the rut, a large percentage of female deer are ready to be bred and become much more active, increasing their daily movement and home range size.  Additionally, male deer will move more frequently and longer distances as they seek out female deer.

Why do hunters like to know when the peak of the rut happens?  More deer movement increases the chance to observe more deer, thereby increasing a hunter’s odds of seeing and potentially harvesting a deer.

So, how do you develop a map that correlates to a deer’s reproductive cycle?  The greater movement by both male and female deer caused by this natural cycle also results in more deer traveling across roadways, making them more susceptible to being hit by motor vehicles.

This knowledge led to a partner effort between the University of Georgia, WRD and Georgia Department of Transportation through which historical deer conception data and deer movement data from other ongoing studies was pooled.  Researchers found a strong correlation between peak deer-vehicle collisions, deer conception dates, and hourly movement rates of GPS-collared deer. Therefore, deer-vehicle collisions were used as an index of deer movement to map the peak dates of deer movement throughout the state.

Thank you for buying a hunting license!  State-managed public hunting lands are funded through a combination of state license fees and matching federal funds from the U.S. Fish & Wildlife Services’ Wildlife Restoration Program.  Hunters account for $977 million in retail sales in Georgia each year with a $1.6 billion ripple effect and almost 24,000 jobs.

Want a preview of what to expect during deer archery season? A brand new video is available at www.youtube.com/georgiawildlife/videos .  Be on the lookout for more deer videos as the season progresses.