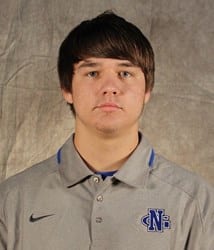 North Georgia (18-14, 9-11) opened the scoring in the third inning when Connor Hoover legged out a perfectly placed bunt down the third base line. Tidaback followed with a single to left. Both runners advanced on Trevor Sams ground out before Steven Tomlinson drove in the first run with a sacrifice fly to right. Designated hitter Joshua Profit then singled to right to make it 2-0.

Lander’s Zach Daly tied the game in the fifth inning when he belted the first of his two homeruns, scoring Matt White who had drawn a base on balls. The Nighthawks added three more runs in their half of the fifth on RBI singles by Tidaback and Sams and a sacrifice fly by Ryan Tomita.

But the Bearcats refused to go quietly. Daly added his second homer off relief pitcher Logan Burt in the seventh and Alex Conaway’s RBI single cut the lead to 5-4.

Relief pitcher Zach Verner came on in the ninth inning to retire the sides in order and record his first save for the Nighthawks.

Sams and Profit each had two hits and an RBI for North Georgia.