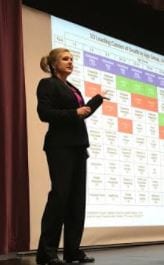 DAHLONEGA, Ga. — It was a somber crowd that gathered in the Lumpkin County High School Auditorium Tuesday evening to hear Dr. Janice Darnell deliver a poignant but vitally important message in the wake of one of the most tragic weeks in the school’s history.

By now, the entire Lumpkin County community knows that in two separate, but related incidents, last week, two LCHS students ended their own lives and another overdosed in an apparent attempt to commit suicide. Out of respect for the victims, their families and their privacy, Fetch Your News will not mention the names of those students.

Darnell, Director of Student Support Services at Dawson County Schools,said
her goal was to help people recognize the warning signs and risk factors associated with suicide. “No family is immune from this,” she said.
Using the most recent figures from the Center for Disease Control from 2014, Darnell pointed out the second leading cause of death among Georgians between the age of 25 and 34 is suicide.

“There is no single path that leads to suicide,” she said. Some of the causes include serious mental illness, sickness, abuse, painful emotional loss and exposure to violence. “Ninety percent of those who have died by suicide have some type of a treatable mental illness.” She also pointed out the importance of recognizing risk factors or symptoms.

Some symptoms of mental health issues can include a sudden, unexplained drop in grades, unusual behavior, interaction with peers, someone who was very outgoing suddenly becomes introverted. A drastic change in appetite, decreased energy, expressed feelings of “no worth” or writing about dark subjects should also send up red flags. Bipolar disorder is one of the leading causes of mental illness.

The good news is that there are many community resources available to help someone who may be contemplating suicide. The National Suicide Prevention Lifeline at 800-273-8255 or suicidepreventionlifeline.org and Georgia Crisis & Access Line at 800-715-4225 or mygcal.com. Locally, there is Lumpkin County Family Connection lumpkin.gafcp.org

Tragedy has a way of bringing communities together and that appeared to have been the case last night as parents, students, educators, clergy, concerned citizens law enforcement officers and elected officials were all there to educate themselves on how to prevent such a tragedy from ever happening again.

As School Superintendent Rob Brown said, “There has been a complete outpouring of support from the college, clergy and community and it is much appreciated. We will do anything and everything to prevent this from ever happening again. Suicide is not a Georgia problem. It’s not a Lumpkin County problem. It’s a national problem.”