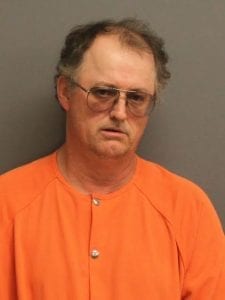 DAHLONEGA, Ga. – A bad day in the life of a Dawson County man would make a good feature on the Investigation Discovery TV program “I Almost Got Away With It.”

George Galbreath, 54 of 7345 Anderson Lake Road, was parked in the parking lot of Hickory Grove CME Church on Old Dahlonega Highway about 11:30 p.m. on April 17 when Lumpkin County Deputy Charlie Roberts approached the car. Galbreath said he had stopped to use bathroom and when  Communications ran his driver’s license and plate it came back as clear so he was allowed to leave.

Moments later, however, Communications said the car was now coming back as a stolen vehicle out of Dawson County.

Roberts caught up to Galbreath on Old Dahlonega Highway and notified him he was under arrest in connection with a stolen car. Galbreath said he purchased the vehicle from Laura Beth Poole for $700 and produced a vehicle title with Ms. Poole’s signature.

While searching the vehicle, Lumpkin County deputies found a paint can that contained three plastic bags suspected of being marijuana along with digital scales and rolling papers, a glass pipe with white residue and an empty bottle of tequila.

Galbreath was transported to the Lumpkin County Detention Center and while conducting a pat down search, Kevin Sargent reported that a green fabric bag fell from Galbreath’s clothing that contained a yellow plastic tube with white crystals and five cotton swabs with a black residue.

When deputies made telephone contact with Ms. Poole, she stated that she had not sold the car to anyone and when she arrived at the Sheriff’s Office, she produced her signature that looked nothing like the signature on the back of the title. She also said that a number of personal items were missing from the vehicle.

Galbreath now faces a long list of charges, including theft by receiving stolen property, possession of dangerous drugs and crossing a guard line with drugs.