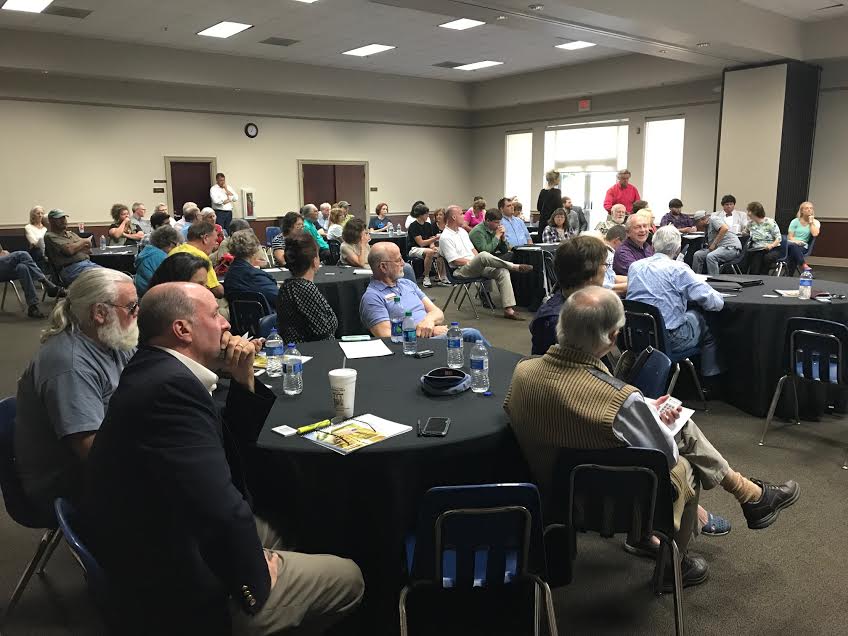 DAWSONVILLE, Ga. – After 18 months of gathering public input via town hall meetings, focus groups, an on-line survey, the Dahlonega-Lumpkin County Chamber of Commerce unveiled an economic development vision and implementation plan to more than 100 eager members of the community Thursday at the Lumpkin County Parks and Recreation Department.

The Chamber contracted with the Carl Vinson Institute of Government at the University of Georgia to coordinate development of the plan. The Institute’s Langford Holbrook narrated the slide presentation Thursday and credited the City of Dahlonega, Lumpkin County Board of Commissioners, Lumpkin County Development Authority, Dahlonega Downtown Development Authority, Chamber of Commerce and the University of North Georgia with being the funding partners. 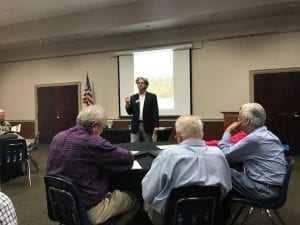 A Steering Committee was formed to process and prioritize what was learned from research and from the 800 responses to an online survey, the 100 people who participated in focus groups and personal interviews and 70 people who attended a town hall meeting.

Based on that input, Holbrook said the community wants to maintain its family-oriented, small-town charm, historical assets, tourism industry as the community grows and attracts business and industry and a viable live, work and play environment.

An implementation strategy calls for continuing the collaboration between the city, county, and the University of North Georgia and creating an “innovation incubator” similar to the one at Georgia Southern University where entrepreneurs can meet and work together to leverage the community resources and maximize the impact development can have on the economic vitality of the region.

Many residents felt that current city and county ordinances related to opening a business are a significant barrier to economic development. Building development renovation, parking requirements, business fees, property taxes and water and sewer access fees were among the ordinances citizens found to be a problem.

Residents also suggested streamlining the permitting process and making it consistent between the city and county. Also recommended was a downtown parking lot that could possibly be funded by the Downtown Development Authority.

Identification of target industries was a key component of the visioning plan. Residents suggested building on the community’s strengths such as attracting more film/TV production, tourism and outdoor recreation. The community’s experience with Japanese firm Koyo Bearings might be leveraged to help attract more Japanese firms.

The University of North Georgia is an asset many communities lack. Growing business and industry to serve UNG and tap its graduates and expertise should be considered.

After key industries are identified, it would be beneficial to develop an incentive plan to attract those industries. Suggestions received from the public included property tax incentives, development authority bond financing, waving permit fees, waiving water/sewer access fees and inventory tax exemption. Basic information about those incentives should be readily available online. Site selection committees often begin with an online search of communities. If they don’t find what they are looking for online, they community could lose a valuable opportunity.