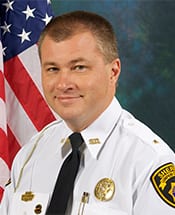 Marc Lofton, who left the Statham force earlier this year after he was accused of making faulty DUI arrests, had been working under a probationary period in Lumpkin County.

“Regarding Marc Lofton, as of July 26, he is no longer employed with the Lumpkin County Sherriff’s Office. Mr. Lofton was released while on a new hire probationary status due to my realization that he would not be successful for the efficient operation of this agency and county.”