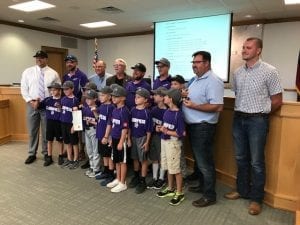 DAHLONEGA, Ga. – The Lumpkin County Board of Commissioners adopted the 2019 budget and approved the rollback millage rate during Tuesday’s voting session. Commissioner Rhett Stringer voted no on both.

They unanimously agreed rename the intersection of Camp Frank D. Merrill and Wahsega Road the Michael J. Ramsey intersection in honor of the legendary retired U.S. Army First Sergeant who was inducted into the Ranger Hall of Fame and inspired thousands of young Rangers before retiring in 1994 and embarking on a career in law enforcement with Lumpkin County Sheriff’s Office. Ramsey rose to the rank of Chief Deputy before retiring earlier this year.