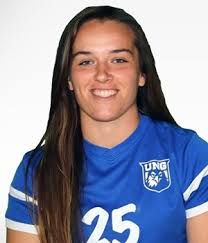 INDIANAPOLIS — Former University of North Georgia women’s soccer player Renee VanHorn was selected as the Peach Belt Conference’s nominee for the NCAA Woman of the Year, it was announced on Tuesday.

The women’s soccer player from Marietta, Georgia, emerged from the field of nine PBC players who were among the initial list of 585 nominations submitted by NCAA institutions at the Division I, II and III levels. Her selection as the conference’s nominee was made by the league’s Senior Woman Administrators.

VanHorn graduated in the Spring of 2019 with a degree in Business Administration with a concentration in Management. Finishing her undergraduate career with a 3.73 GPA, she was named to the PBC All-Academic Team three times and the Presidential Honor Roll three times as well, earning a gold, silver and bronze scholar. She was also awarded the Women of UNG Leadership Recognition Award in 2018 as one of the top ten student leaders at North Georgia.

The Top 30 honorees, comprising 10 women from each division, will be named by the Woman of the Year selection committee in September. The selection committee will then narrow the pool to nine finalists – with three from each division – in early October. From those finalists, the NCAA Committee on Women’s Athletics will select the 2019 Woman of the Year.

The 2019 Woman of the Year will be named, and the Top 30 honorees will be celebrated, at the annual banquet Oct. 20 in Indianapolis.

The NCAA Woman of the Year program has recognized graduating female student-athletes for excellence in academics, athletics, community service and leadership since its inception in 1991.