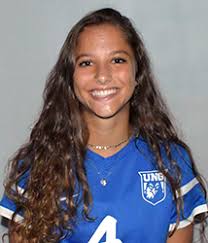 DAHLONEGA – Dani Shartouny scored off a corner kick, providing the No. 20 University of North Georgia women’s soccer team with the game-winner in a 2-1 win over UNC Pembroke Saturday afternoon at the UNG Soccer Complex.

North Georgia struck the scoreboard first as Abbie Crane found Katey Derkay in the middle of the penalty area and the freshman beat the Brave keeper to put UNG up, 1-0.

UNCP didn’t go quietly as they broke through in the 60th minute as Riley Seering earned a deflection off a failed clearance and put the ball in the net to tie the game, but the Nighthawks got the last bit of momentum as Shartouny bent a corner kick off the inside of the far post to put UNG ahead for good.

NOTES
In a very defensive game, there were only 15 combined shots taken. North Georgia took eight, five of which were on goal, while UNC Pembroke took seven with just two on frame.

The win for UNG snaps a three-match losing skid against the Braves in the all-time series. UNCP has gone over a decade without winning on the pitch in Dahlonega.

NEXT UP
North Georgia will host Georgia Southwestern on Spirit Night in Dahlonega on Wednesday. Kickoff is set for 6 p.m.