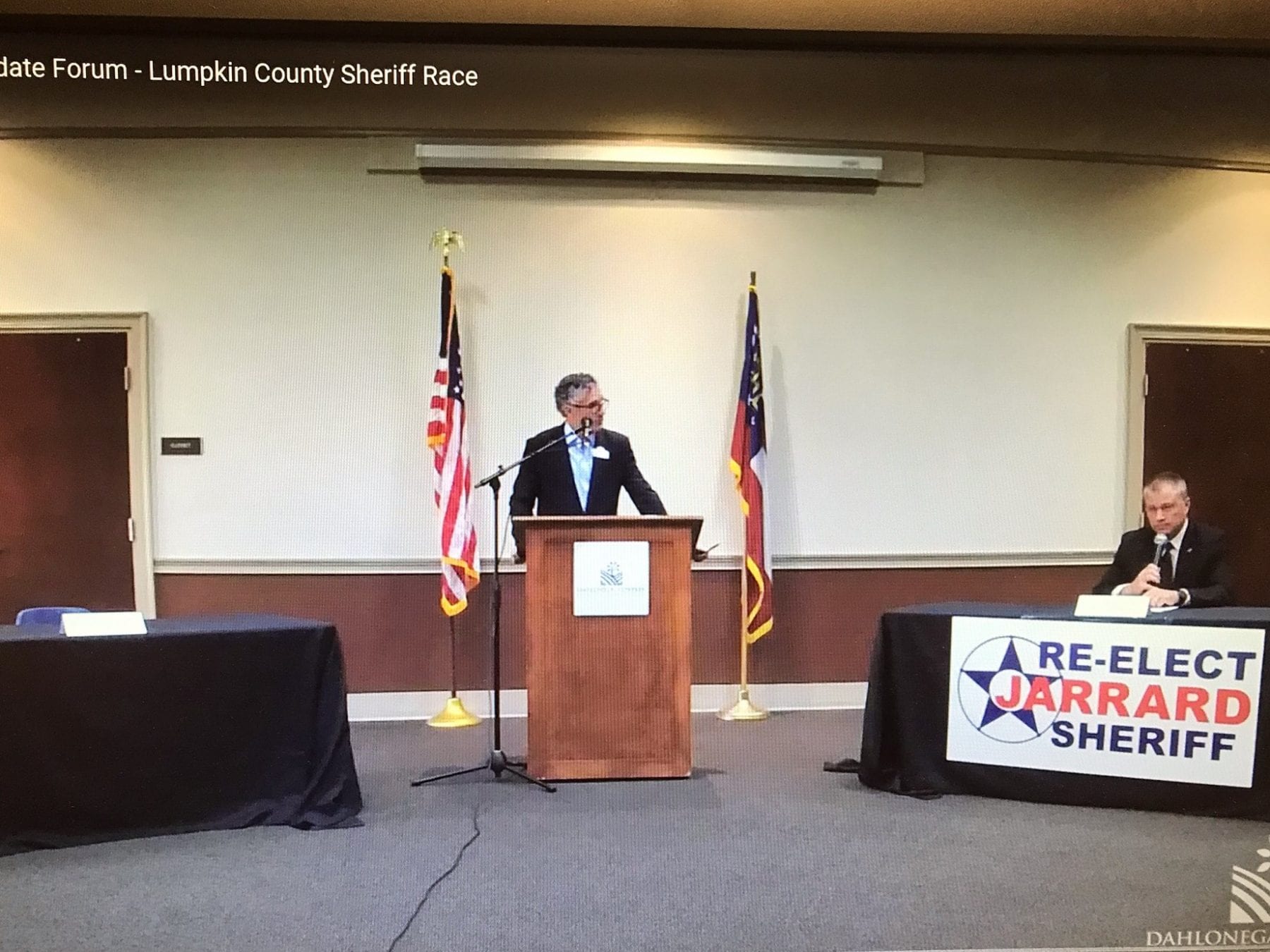 LUMPKIN COUNTY, Ga. – Although Lumpkin County voters have already elected him three times, Sheriff Stacy Jarrard still felt it was important for him to appear before them to ask for their vote in person in the June 9 General Primary election. His opponent, Jack Jones, felt differently.

Jones was a no-show at the Dahlonega-Lumpkin County Chamber of Commerce teleconference sponsored by Debbie and Chuck Jones Tuesday (May 19). Event moderator Robb Nichols read a prepared statement from Jones explaining his absence.

In an email addressed to Nichols, Jones said, “I am sorry to say that I will have to respectfully decline. At this point, the safety of my family and the citizens of Lumpkin County means the most to me. I need to lead by example when it comes to this gathering that could potentially infect other citizens or myself.”

Nichols said, “The staff and I organized this event to ensure the health of the candidates and volunteers present.”

Jarrard said he was surprised at Jones’ refusal to appear.

In a telephone interview Wednesday, Jarrard added, “Being sheriff, you can’t pick and choose when you show up for the citizens. I have to take a high dose chemo medicine every day but I was there. I’m willing to give my life for this community.”

Jarrard, 52, is a lifelong resident of Lumpkin County. He has been in law enforcement 32 years and sheriff for 12. He and his wife Rebecca, who works at the middle school, have three children, McKenzie, Brianna and Luke. He teaches an adult Sunday school class.

Jarrard said being in law enforcement is the dream of a lifetims. He was elected by his law enforcement peers to serve as President of the Georgia Sheriff’s Association this year. He is also the past president of Georgia Youth Homes.

“I work on issues every day not only here in Lumpkin County, but throughout the state with the Georgia Sheriff’s Association,” he said. “I’m just thankful to be here as your sheriff.”

Asked about the FY 2021 budget and what impact the COVID-19 pandemic may have on the Sheriff’s Office, Jarrard said he met with County Manager Stan Kelley last week to discuss the budget.

“We’ve worked on that already,” he said. The Sheriff’s Office has operated under budget every year of his tenure. One reason, he said is because, “I’ve brought in close to $5 million housing out-of-county inmates to help offset the taxes here in the community. For the last 12 years, we’ve always been able to give money back to the county.”

Jarrard said he posts the Sheriff’s Office budget on Facebook for the public to see. “You can see exactly what the sheriff’s office is spending.”

Jarrard also spoke about improvements that have been made since he was first elected. “We went through a certification program with the state of Georgia where we got certified three times and we also got the medical association to do the certification program at the medical facility inside the jail to show were operating at a high standard there. We’ve upgraded the 911 center making it a state-of-the art 911 center.”

That fact that he has established a good work relationship with state and federal law enforcement agencies was clearly evident last September as hundreds of demonstrators and counter protesters gathered in downtown Dahlonega for the “American Patriot Rally for President Trump.”

When he found out the event was planned, Jarrard sent out emails for assistance and 600 law enforcement officers from 36 local, state and federal agencies responded to keep the peace. The event ended peacefully without injury or property damage.

He closed by saying, “I would be honored to serve you again for another term.”