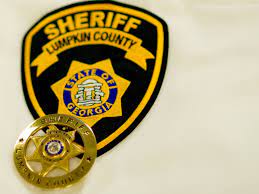 LUMPKIN COUNTY, Ga. – Jamey Michael Tuggle, 44 of Dawsonville, has been charged with aggravated assault, battery, and false imprisonment following a domestic altercation with his girlfriend, Kristi Michelle Thomas, that occurred in March at a local motel.

According to the arrest report, the incident took place after Thomas bonded Tuggle out of the Lumpkin County Detention Center.   The victim stated that when they arrived at the motel, he threatened to kill her, struck her several times and strangled her with a belt. When the alleged assault stopped, they drove to a friend’s house. The friend was not at home so they returned to the motel where she was allowed to call her mother. The mother and uncle arrived and took her to Northeast Georgia Medical Center for observation. Thomas told hospital security she did not want to talk to law enforcement and she returned home.

Three days later, Tuggle allegedly kicked in her door and another altercation occurred before Lumpkin County Sheriff’s deputies arrived and took him to jail.