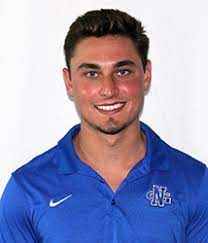 GREENSBORO, NC. — Before the baseball season gets too far in the rearview mirror, Fetch Your News would like to recognize a University of North Georgia player who received an award in June that only one player in school history has earned.

The American Baseball Coaches Association and Rawlings Sporting Goods announced the NCAA Division II Gold Glove teams with the University of North Georgia’s Crews Taylor earning a spot on the prestigious nine-player list as an outfielder.

The ABCA’s Southeast Region Position Player of the Year and All-American, anchored down centerfield for the Nighthawks where he collected 184 putouts and gunned down five runners in an errorless 51-game season.

The senior led the Peach Belt in home runs, doubles, runs scored, slugging percentage and total hits and was in the league’s top 10 in batting average and RBI. His 23 home runs this season is tied for ninth-most in a single season in PBC history and is sixth-most in NCAA Division II this season.

He was named PBC Player of the Year and first team All-Conference prior to being named All-Region first team by D2CCA, NCBWA and ABCA.

Taylor added 17 doubles and 56 RBI, scoring 69 times while posting a .758 slugging percentage and stealing 18 bases in as many attempts.