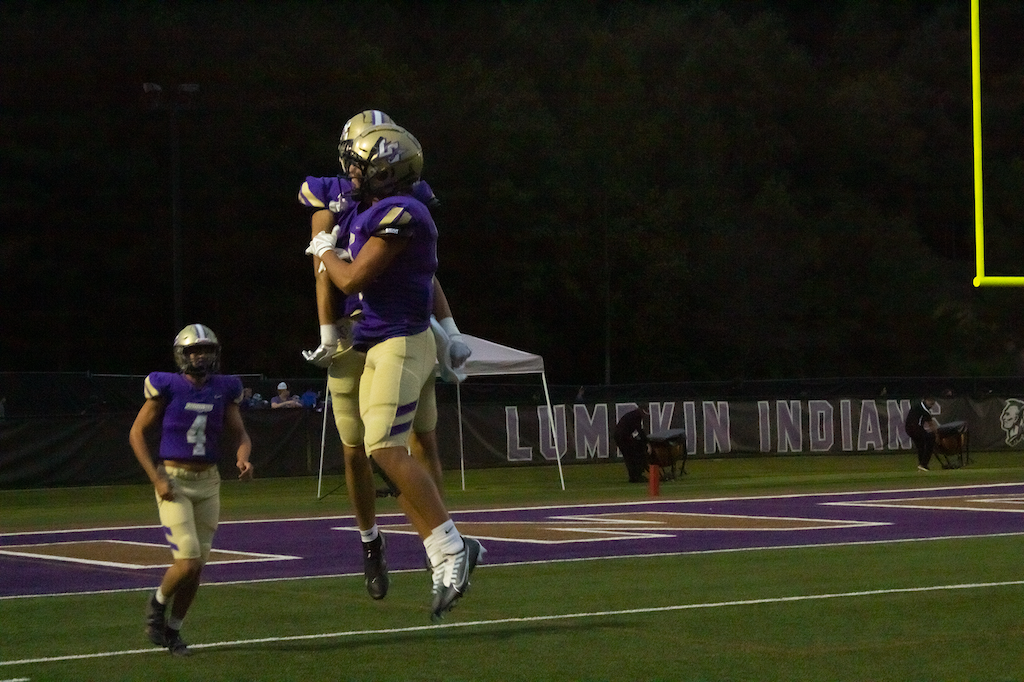 The Lumpkin County Indians hosted regional opponent the West Hall Spartans for their final game of the regular season. It was a big night for the Indians as they awaited the outcomes of other games in the region to determine their seeding in the playoffs. The game started slowly as neither offense was able to generate a lot of momentum. Regardless of the slow start, the Indians would find themselves up 14-0 at the end of the first quarter. The Spartans would respond with their first and only score of the game in the second quarter to make the score 14-7 as the second quarter began. The Indians would struggle on their next three offensive drives as they were forced to punt the ball away on all three occasions. The Indians would find their groove after a 96-yard drive that ended in a touchdown following their three turnovers. The Indians were able to score again in the half to give them a commanding 28-7 lead heading into the second half. The third quarter would be all Indians as they dominated on both sides of the ball, extending their lead to 42-7 with one quarter to play in the game. The Spartans would make forward progress on offense in the 4th quarter, but could not overcome the Indian defense. The Indians would score two more times in the game making the final score 55-7. 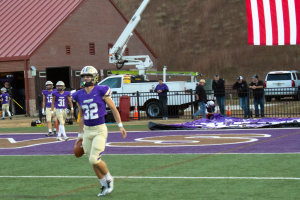 The first quarter began with the Indians receiving the kick from the Spartans ready to score first in the contest. A strong Spartan defense stopped the Indian’s first series and found themselves on 4th and 1. #18 Cooper Scott handed the ball off to #32 Mason Sullens who got through for a first down and then some. However, after a penalty, the Indians were unable to break through and were forced to punt the Spartans. Luckily for the Indians, the punt would bounce and put the Spartan offense at their own 5-yard line. The Indian defense responded and forced a Spartan punt that was caught by #1 Cal Faulkner for a great run back into Spartan territory. On the next series, the Indians were set to score first as Scott pitched the ball to Sullens who made it to the endzone but a holding flag against the Indians voided the score. After the penalty, Scott found #5 Carter Desanto for a first down that would lead to a 3-yard rushing touchdown by Sullens to make the score 7-0 Indians with 5 minutes left in the first quarter. The Spartans got the ball back and were looking to make up for the previous drive that ended in a turnover. The Spartans would have no luck as #14 Brett Sturm through a pass that was intercepted by #14 Jay Grizzle who brought it to the Spartan’s 14-yard line for the Indians. It would not take long for the Indians to score again as Scott faked a handoff to Sullens and ran in for a 5-yard touchdown making the score 14-0 with 4 minutes left in the quarter. The Spartans could not get any offense generating after they received the kick and were forced to punt after #34 Dakota Bennet blocked a 3rd down pass by Sturm. The Indian’s offense would turn the ball over for the first time in the game and the Spartans would get the ball back at their own 34-yard line with 24 seconds left in the quarter. The Spartans would get one play-off before the buzzer but were met with a strong Indian pass rush led by #25 Cam Stringer for a sack on Sturm.

The Spartans had the ball to begin the second quarter following the quarterback sack. The Spartans got into the Indian’s territory after a broken play that resulted in a first down within the Indian 30-yard line. After a penalty against the Indians, the Spartans were able to score on a trick play where #8 Andrew Malin got the ball and passed to #16 Ethan Clifford for a touchdown to make the score 14-7 Indians still on top. The Indians kept the ball on the ground for the next series relying on Sullens for the first three plays. Scott could not convert on a 3rd and 7 as he was pushed out of bounds in the backfield forcing another Indian turnover. The Spartans were successful to begin their next series moving the ball to midfield, but the Indian defense was able to make a stop and force a punt back to their own 22-yard line. The Indian offense began to look lethargic in the next series as they went three and out and were forced to punt for the third consecutive time in the game. However, the Indian defense kept rolling against the Spartan offense as they forced a punt. The punt was bobbled by Faulkner on the return which put the Indian offense within their own 5-yard line with 5 minutes left in the first half. The Indians were getting success on their following drive thanks to Sullens who was hammering the ball through the Spartan defense to give his team some momentum. The Indians got past midfield after consecutive passes to receiver #12 Caleb Norell that set up a Sullens run to put the Indians at the Spartan 5-yard line. Sullens would get the handoff on the next play and would run it in for a touchdown capping off a 96-yard drive, giving the Indians a 21-7 lead with 2 minutes left in the half. After a Spartans turnover, the Indians would have one more chance to score in the half with 1:15 left on the clock maintaining all three of their timeouts. The Indians would call their first timeout after a pass to Faulkner that put the Indians in Spartan territory. Faulkner would receive a pitch pass on the next play from Scott who ran the ball into the endzone for a touchdown making the score 28-7 with 35 seconds left in the first half. The Indians would squib the kickoff to the Spartan 34-yard line as the Spartans were aiming to get back into the game before halftime. The Spartan’s running back #3 Solomond Carter would run the ball twice before the clock ran out. The two teams would go to the locker room with the score at 28-7, Indians lead.

The second half began with the Spartans receiving the ball down three scores. The Spartans had a successful start as they were able to convert on 3rd and short to get to the 33-yard line. #16 Ethan Clifford would receive a pass from Sturm on the run to get to midfield. The Spartans were met with a strong Indian defense that stopped the Spartan offense as they went for it on 4th down and turned the ball over in the red zone. The Indians kept the ball on the ground with Sullens and #22 Will Wood who drove the ball down the field. The Indians elected to attempt a 4th down conversion as they were within the Spartan 20-yard line and Scott kept the ball to run for the first down. Scott would find Faulkner for a 16-yard connection for a touchdown making the score 35-7 with less than 4 minutes in the third quarter. The Spartans would throw their second interception as #31 Tavion Lawerence intercepted the ball and brought it back for a score putting the Indians up 42-7 following their previous scoring drive. The Spartans began the following drive by getting the ball down into Indian territory as the third quarter came to a close.

The Spartans began the final quarter with possession looking to get anything positive in their final game of the season. The Spartans got to the Indian’s 20-yard line but were forced into a 3rd down and long after a quarterback sack by Grizzle for a loss. On the next play #2, Harper Davenport got to the ball for an interception to give the Indians possession at their own 30-yard line. After an Indian’s timeout, #28 Gerald Walker ran 51-yards for a touchdown making the score 55-7 after the missed extra point. The Indians kicked the ball back to the Spartans with 5 minutes remaining in the contest. The Spartans would get downfield as the second string would come in for the Indian defense. The Spartans would come close to scoring but could not make the score-driving play. The clock would run out and the Indians would beat the Spartans 55-7 in the final game of the regular season.

The regular season came to a close on Friday night with the West Hall Spartans done for the season and the Indians looking ahead to the playoffs. The Indians finish the regular season with an 8-2 record-tying their program’s best record in their 62-year history. With the Pickens County Dragons defeating the Wesleyan Wolves at home, the Indians would slot in as the second seed giving them home-field advantage in the playoffs. With the playoff picture set, the Indians will host Oconee  Saturday for their first playoff appearance since 2014.