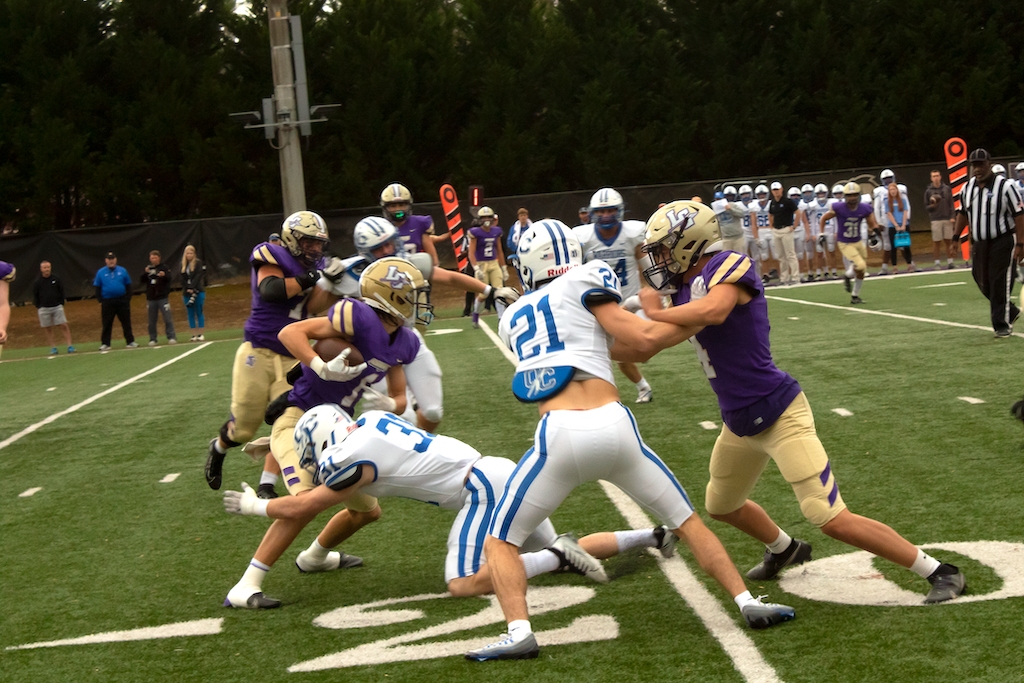 The Lumpkin County Indians hosted the Oconee County Warriors at Cottrell field for round one of the playoffs. The Indians had met their toughest foe in Oconee County as they were steadily handled in the game. The Warriors came out of the gate on fire, scoring 5 touchdowns before the end of the first quarter to give themselves a commanding 35-0 lead. The Indian offense was punted three times on their first three possessions allowing the strong Oconee offensive unit continue to score. The Warriors continued to pour it on in the second quarter, scoring two more times before halftime to make the score 49-0. The Indians played much better in the second half, not allowing the Warriors to score any more in the contest. The Indians were able to breakthrough for their first score in the third quarter and twice more in the fourth to make the score 49-21 as the game began to come to an end. The score would stay there as the Warriors defeated the Indians 49-21 to advance to round two of the playoffs. 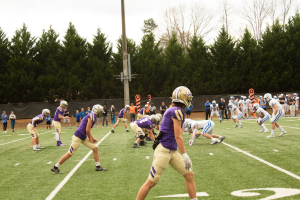 The Warriors began the game with the ball and started an offensive onslaught against the Indian’s defense. #15 Mac Ricks started the Warrior drive with a 60-yard run down to the Indian’s 12-yard line. Ricks’s big run would be capped off with a handoff to #3 CJ Jones who ran the ball in for a 12-yard touchdown one minute into the game. The Indian’s offense got the ball but was stifled by a tough Warrior defense. The Indian offense would be backed up to their own 13-yard line after a holding call against them. #40 Judah Birch got to Indian quarterback #18 Cooper Scott in the backfield forcing an Indian punt from their own 1-yard line. The Warriors got the ball at the Indian 34-yard line looking to get another quick score and did just that. Jones ran the ball on two plays to get into the endzone for his second rushing touchdown to put the Warriors up 14-0 after the extra point. The Indian’s next drive on offense would result in a 3-and-out punting back to the Warrior’s 35-yard line. The Warrior offense marched down the field on the next drive setting up another Jones run for a 21-yard touchdown making the score 21-0 with 4 minutes remaining in the first quarter. The Indian offense got the ball back looking at three score deficit. The Warrior defense led by #88 Zane Fairbanks would get to Scott in the backfield for a sack setting up another 3rd and long for the Indians. The Indians would get help as they got the Warrior defense to jump offsides setting up 3rd and 15. Scott would scramble and throw the ball to #5 Carter Disanto for an 11-yard pickup but would be tackled short of the first down marker forcing another Indians punt. The punt would fall at midfield and the Warrior offense immediately got within the Indian’s 5-yard line. Jones found a hole and scored on a 2-yard rushing touchdown giving the Warriors a commanding 28-0 lead in the first quarter. The Indian’s next possession would not last long as #21 Cameron Thurmond intercepted Scott’s pass and ran it back to the Indian 11-yard line. Jones would need just two plays to run the ball in for a score, marking his 5th rushing touchdown in the first quarter of the game. The Indians would get the ball back and were looking for anything positive as the first quarter began to wind down. The Indians would get to just before midfield after a 15-yard pass from Scott to #1 Cal Faulker to give the Indians their first first down in the game as the quarter came to a close.

The Indians were making progress down the field but found themselves on 4th and 6 at midfield. Faulkner would find #31 Tavion Lawerence on a screen pass, but would not be able to get past the first down marker turning the ball over on downs. The Warrior offense got the ball back looking to add to their 35-point lead. The Indian defense stepped up on the next series led by Faulkner and player of the week #23 Preston Cox. Faulkner nearly intercepted a pass forcing a 3rd and long for the Warriors. Cox got the quarterback for a sack to force a 4th and long for the Warriors. The Warriors elected to punt for the first time in the game giving the Indians some momentum to build off of. The Indians would have no luck as they went 3 and out and punted the ball back to the Warriors. The Warriors went back to work on the next drive scoring on a receiving touchdown by #12 Mac Little to put them up 42-0 halfway through the second quarter. The quarter would continue with the Indians unable to produce on offense giving the ball to a ruthless Warrior offense. The Warriors continued to run the ball down the field controlling the tempo of the game. The rushing unit for the Warriors would find the endzone again putting them up 49-0 on the Indians with 3 minutes remaining in the half. The Indians would have more one shot on offense in the half but were met with another Warrior interception by #26 Harrison Kilzi. The Warriors kept the ball on the ground on their next possession, taking their time as the clock ran out. The Warriors and Indians went to their respective locker rooms with the score at 49-0 Warriors.

The Indians began the second half with the ball and were making progress toward their first potential score as they made their way into Warrior territory. The Indians could not score but put the Warrior offense in a difficult field position on the next series. The Indian defense stepped up on the Warrior’s first possession of the half forcing them into a 4th and long after a quarterback sack by Cox. The Warriors would go for it on 4th and long but would be met with another sack by #55 Connor Greilich forcing a turnover on downs. The Indians began pushing down the field after the Warrior turnover getting into the red zone for the first time in the game. #32 Mason Sullens would bring relief to a struggling Indian team on a 5-yard rushing touchdown to give their first points of the game. The Warrior offense received the ball at their own 30-yard line on the next drive with 2 minutes remaining in the third quarter. In the final seconds of the quarter #2, Harper Davenport intercepted the ball and ran it back to the Warrior’s 20-yard line setting up an Indian possession at the beginning of the 4th quarter.

The Indians began the final quarter threatening to score within the Warrior’s 20-yard line. Sullens ran for 13-yards setting up a rushing touchdown by #28 Gerald Walker to make the score 49-14. The Warriors began draining the clock on the next drive, keeping the ball on the ground and taking their time in between plays. The Warriors would eventually be stopped at midfield as they turned the ball over on downs. The Indians got the ball back at midfield and were looking for another scoring drive with 6 minutes remaining in the game. The Indians would get to the endzone on a 16-yard passing touchdown from Scott to Disanto to give them another touchdown in the quarter making the score 49-21 with less than two minutes in the game. The Warriors would run a couple of plays on the next drive before kneeling the ball to let the game clock run out. The Warriors beat the Indians by a final score of 49-21.

The Oconee County Warriors will move on in the playoffs with their victory against Lumpkin County. The Warriors will go on to face the Adairsville Tigers in the second round of the playoffs on November 18th. While it is not the ending that Lumpkin County hoped for, it was still an amazing season for the team and the community in Dahlonega. The Indians finish their season with a record of 8-3 and 4-2 in their region earning second place in the 7AAA region. First-year head coach Heath Webb had an amazing start to his career in Lumpkin leading the Indians to their first playoff birth since 2014 and tying their all-time single-season win record. Congratulations to the Lumpkin County Indians on their historic season in 2022.