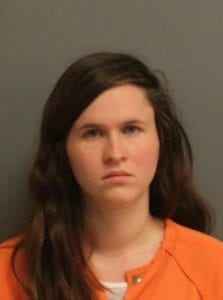 DAHLONEGA, Ga. — More than a year after the death of her two-month old son, 19-year-old Megan Dix of Dahlonega has been arrested and charged with murder in connection his death.

The Lumpkin County Sheriff’s Office responded to Ms. Dix’s residence on Winters Mountain Road for a medical issue involving her son, Jalen, on Dec. 15, 2015. Upon arrival, the child was found to be unresponsive.

The child was rushed to Northeast Georgia Medical Center and later to Scottish Rite Hospital in Atlanta where he died. The Georgia Bureau of Investigation performed an autopsy that determined the injury could not have been self-inflicted. However, it took more than a year before the results were ready to be presented to a Grand Jury.

Dix was arrested at her home on Skyline Drive and transported to the Lumpkin County Detention Center where she is being held without bond.
Sheriff Jarrard said that Dix admitted to being with the baby at the time of the incident that claimed the child’s life.