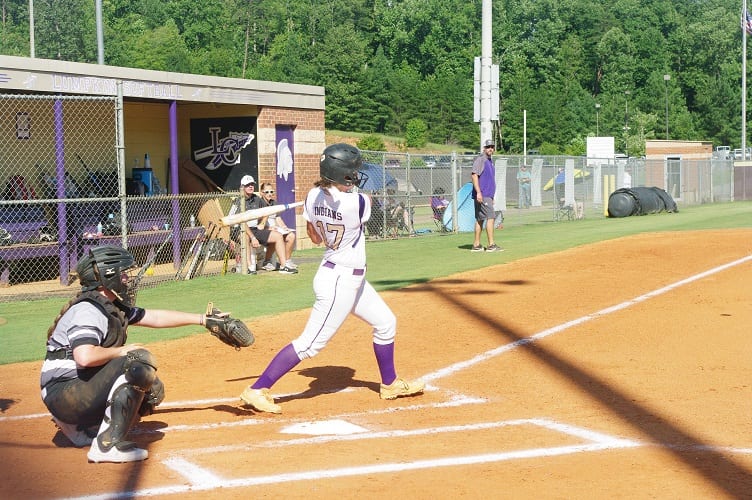 The Lumpkin County Lady Indians softball team finished off their non-region play on a positive note. They won their third game of the week against the Chestatee Lady War Eagles at home on Thursday.

The Lady War Eagles showed up ready to fight for a come back from their 17-0 loss against the Lady Indians on Tuesday. Shortstop K.T. Palmieri hit a leadoff single for the Lady War Eagles in the top of the first. Unfortunately the next couple of batters were unable to put the ball into play like they needed, and the Lady War Eagles left one stranded going into the bottom of the inning.

The Lady Indians spent the next couple of innings battling to put runs on the board. Starting pitcher Natalie Robinson drilled a double to center field, and catcher Natalie Schubert brought in the first run of the game right after with a single to left field. 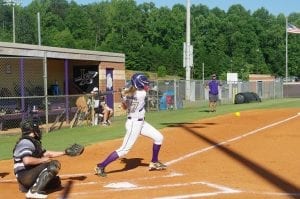 Lady Indian Hayley Voyles contributed to the victory on Thursday.

During their next turn to bat the Lady Indians scored a total of six runs to bump the score up 7-0. Hayley Voyles hit a single to center field, and an error on the Lady War Eagles allowed the runners to advance. A string of back-to-back walks and singles gained the Lady Indians three more runs. This drive was capped off by a double from Schubert that brought in three runners. After some impressive offense the Lady Indians left the inning with a comfortable lead.

The Lady War Eagles fought over the next couple of innings to put runs on the board. A couple of singles put the ball into play, but great defense from the Lady Indians held them back.

Starting pitcher for the Lady Indians Natalie Robinson pitched a total of four and a half innings allowing no runs with five strikeouts. The Lady Indians have a record of 4-4 going into their first region game against Dawson County on Monday.

“Tomorrow we’re gonna work,” said head coach Joe Jones about preparing for region play. “We’re gonna have a good workout tomorrow, give them a little time to recuperate this weekend and hopefully go and play with a lot of confidence on Monday.”