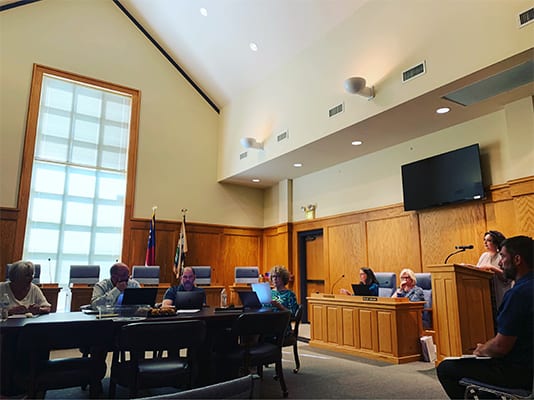 Ordinance 2019-24 will help regulate the time, place, and manner of “planned and spontaneous demonstrations on public property.” According to Dahlonega Mayor Sam Norton the ordinance, “Gives the city manager the authority to issue an order and broad discretion on how to investigate the time, manner, and place [of city events].”

According to 2019-24, the city manager is, “Authorized to issue content-neutral time, place, and manner regulations to govern upcoming demonstrations and counter-demonstrations in the city,” through written orders.

With this, the city manager will have the authority to “restrict the time and length of the event or place regulations on the number of participants who may gather or congregate upon public property, public sidewalks, public rights-of-way, and places of public assembly to which the public has access.” The purpose is to protect the “public’s use and enjoyment of public spaces.”

Dahlonega City Manager Bill Schmid explained that those who wish to participate in demonstrations held on public property would be designated to a specific “free-speech zone,” where they would also be required to follow any rules set forth by the city. Schmid explained that there would be, “Signage created to identify the rules,” and they would also be posted on the internet and handed out to participants as they arrive at the event.

City Marshal Jeff Branyon explained that law enforcement would be present to ensure all participants followed the regulations, and the proposed rules will be available online for the public prior to the event. The Council also set a “Sunset Date” for December 31, at which time they will revisit the ordinance and make any necessary changes or adjustments.

“This is a public safety issue,” explained Braynon. He also stated that the University of North Georgia Drill Field is designated as a landing pad in the event of an emergency, and the use of drones during festivals and large events may interfere.