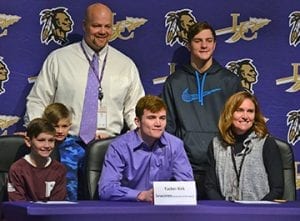 A record six members of the 2020 graduating class at Lumpkin Co. High signed to play sports at the next level Wednesday, Jan. 29, at the school. The six athletes are the most to sign at one time in the school’s history.

In football, the Indians had two players commit to play in college.

Tucker Kirk committed to play for Sewanee, The University of the South. Kirk, who stands 6-foot-3 and weighs 200 points, played quarterback and free safety for the Indians. Last season, Kirk was 72-of-132 passing for 755 yards and three touchdowns, while carrying the ball 74 times for 84 yards.

Aaron Hopkins committed to play for Davidson College. Hopkins, who stands 6-foot-5 and weighs 235 pounds, played tight end and defensive end for the Indians last season. He totaled three catches for 56 yards and had 31 total tackles and two sacks for the Indians during his senior campaign. 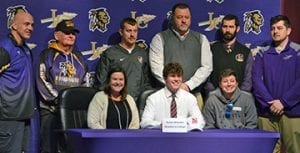 Hope Kenney signed on to play soccer for Truett-McConnell University next season. Kenney finished the 2019 season with 33 goals, eight assists, and 74 total points as a junior. 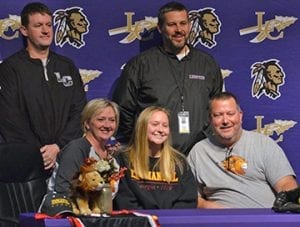 Laken Ferrell signed to play tennis at Piedmont University in the fall. Ferrell was 12-4 as the No. 1 singles for the Indians as a junior during the 2019 season.

Brighton Harder committed to play softball for Emmanuel College next year. Harder helped lead the Lady Indians to a 20-14 overall record, while going 10-2 in Region 7-3A and making an appearance in the Class 3A state championship playoffs.

Lumpkin Co. football coach Caleb Sorrells summed up the day by speaking for all the coaches at the school.