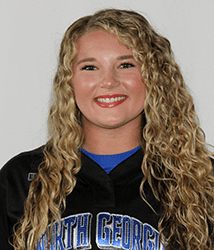 DAHLONEGA – For the seventh consecutive year, the fourth-ranked University of North Georgia softball team can call itself Peach Belt Conference Regular Season Champions as they took down Columbus State Sunday. The regular season crown was won after a 3-1 win in the first half of the twinbill before the Nighthawks walked off the nightcap with a grand slam.

Columbus State struck first as Morgan Elston hit a solo homer to center field in the second, but the Nighthawks responded immediately, plating a pair on a Gracie Mixson RBI single and a RBI groundout to take the lead.

Neither team was able to scratch a run across until UNG broke through in the fourth on a Shelby Hammontree RBI single up the middle, putting the game at its final score.

Kylee Smith (14-3) was given the win, going all seven while fanning six. 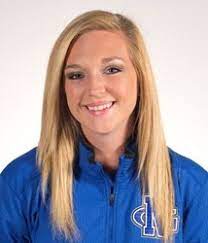 The Cougars again found the scoreboard first, this time putting up two in the first inning on an Elston sacrifice fly and a RBI single from Laura Harris. Hannah Rose Corbin extended the CSU lead to 3-0 in the second on a fielder’s choice.

From there, it was all UNG as Marley Holmes got the Nighthawks their first hit of the game on an opposite field homer that trimmed the lead to 3-1 in the third. In the fifth inning, Kaylyn Anthony singled through the six hole to bring home another run.

The Nighthawks loaded the bases up in the seventh for Hammontree who nearly hit the scoreboard in right center with a walkoff grand slam, breaking the career home runs mark at UNG in the process.

Laken Chambers (11-0) got the win in relief, going 5.2 innings and allowing just one hit. She struck out three Cougars.
NOTES
– UNG extends its record of consecutive Peach Belt titles to seven. They have won a total of 10 conference regular season titles, the most in conference history.
– Following the doubleheader, the UNG softball program honored eight players who either already have or are ending their careers following this season, including 2020 seniors Jenna Goodrich and Lexi Duncan as well as Smith, Hammontree, Anthony, Chambers, Cheyanne Mosteller and Margaret Simmons.
NEXT UP
UNG will host Columbus State in a single game on Saturday, May 8, in the Peach Belt Conference Tournament semifinals. Check UNGAthletics.com later this week for game time and ticketing information.