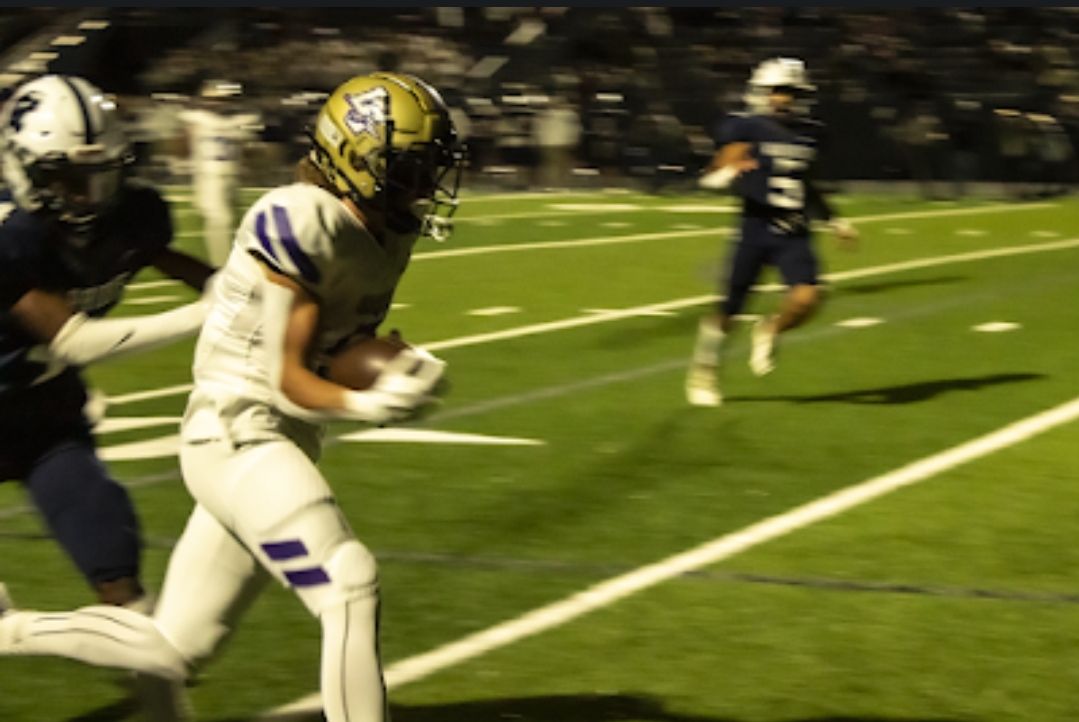 The 6-1 Lumpkin County Indians took a bus ride to Cleveland to take on the 3-4 White County Warriors in a regional matchup. The Indians were coming off a huge victory against Gilmer looking to stay on pace with the Dawson County Tigers in Region 7AAA. The Warriors were coming off a victory over the West Hall Spartans looking to keep their playoff hopes alive. The contest showed to be an offensive showdown as the two teams combined for 91 points scored. It was a tale of two games for the Indians as their offense scored the second most points they had all season while the defense allowed the most points they had all season. The first quarter would be slow, but the Warriors would have a 13-7 lead at the end of the first quarter. The second quarter would show both offenses going off for several scores, but the Indians were able to grab a commanding 42-28 lead going into halftime thanks to two big interceptions from their defense that resulted in scores. The second half would have an odd start as the Warriors would pick up their kickoff to give their offense possession. The Warriors would be unable to score giving the Indians the ball back. The Indians would control the ball for the majority of the quarter and were able to score again before the end of the 3rd quarter making the score 49-28 Indians in the lead. The Warriors would score in the early minutes of the 4th quarter, giving them a chance to come back in the game as they were down 49-35. The Indians would score on their next possession, putting the game out of reach as they were up 56-35 with seven minutes left to play. The Warriors would get another chance to score but would be unsuccessful as they turned the ball over on downs at the 5-yard line. The Indian’s offense would keep the ball on the ground on the next possession as the clock winded down. The game clock would run out and the Indians would beat the Warriors 56-35. 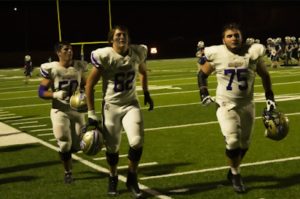 The contest began with the Warriors receiving the ball, #7 Cam Wilson set the tone early with a great return to midfield. The Warrior offense wasted no time getting down the field and quickly found themselves in the red zone. Wilson would finish the drive on a 2-yard rush to score the game’s first touchdown. The Indians would get the ball back, but a flag against them would push their return back to their 18-yard line. #18 Cooper Scott led the drive to begin, finding #1 Cal Faulkner for a reception that set up 2nd and 1. Scott then found #2 Harper Davenport for a deep pass, but the Warriors committed a personal foul that broke up the connection. The penalty against the Warriors would be costly as the Indians were set up at midfield. The Warrior’s defense responded by putting the Indians in a 3rd and long situation. Still, a holding penalty against the Warriors would give the Indians a fresh set of downs at the 40-yard line. The Indian’s offense was moving down the field, but taking their time and finding themselves on two different 4th down situations. #32 Mason Sullens helped the offense overcome the 4th downs by rushing into the red zone for a first down. Scott would finish the drive with an 8-yard rush into the endzone, tieing the game at seven a piece. The Warriors received the kick with three minutes left in the first quarter and quickly flipped the score. On the first play after the kick return, Wilson found #17 Ryan Fowler for a 78-yard touchdown. The Warriors were set up for the extra point, but before the Warrior’s kicker could get the ball in the air #14 Jay Grizzle got a hand in to block the pat. The score would now be 13-7 and it would stay that way as the first quarter came to a close.

The second quarter began with the Indians threatening in the red zone, Scott found a hole up the middle to give the Indians the lead. The Warriors received a short kick at their 44-yard line down 14-12. It would not take long for the Warriors to score as Fowler scored a 44-yard touchdown on a counterplay. The Warriors elected to go for two, and a pass from Wilson to #32 Cade Dockery would do just that, putting the Warriors up 21-14 against the Indians. The Indians got the ball back at their 39-yard line and quickly moved the ball into Warrior territory. The Indian offense found themselves on the Warrior’s 4-yard line and handed the ball off to Sullens who powered through for a rushing touchdown making the score 21-21 after the extra point. The Warrior offense would struggle after getting the ball back, their series would end in a punt as #55 Conor Greilich got to the quarterback forcing a 4th and 5. The Indian’s offense picked up the punt at their 25-yard line with six minutes left in the first half ready to take advantage of the Warrior turnover. Scott led the next series with a rushing attack, completing a huge run from their 25-yard line to the Warrior’s 31-yard line. Scott would get the call again on 3rd and 8, and rushed to another first down. Scott’s impressive series set up an 11-yard run by Sullens for a touchdown, making the score 28-21, Indians on top. The Warrior offense received the kick and quickly responded to the Indian touchdown. Wilson found #5 Kane Lowery deep in the endzone and took a shot for the touchdown. Lowery would bobble the pass due to great coverage by Faulkner but still managed to hold on for the touchdown, tying the game at 28 a piece. The Indian’s offense had no luck on the next series as they went three and out and were forced to punt back to the Warriors. The Warriors began at their 17-yard line and needed to move quickly if they wanted to score before halftime as there was only one minute left in the second quarter. Wilson’s first pass was intercepted by #12 Caleb Norel for a pick-six, electrifying the Indian’s sideline. The Indians would now lead 35-38 with less than a minute left in the half. The Warriors received the ball and looked to bounce back after a costly interception, but to avail. The Warriors once again passed on the first play of the series, only to be intercepted by #31 Tavion Lawerence at midfield. The Indian offense came back on the field and had all of the momentum after back-to-back interceptions. The Indian’s offense called a hitch-and-pitch play from Scott to Davenport to Sullens for a beautiful 50-yard touchdown making the score 42-28 with only seconds left in the half. The Warriors were able to get one playoff but headed to the locker room down two scores. 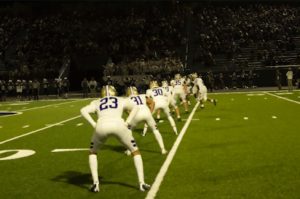 The second half got off to an interesting start as the Warriors were able to recover their kick-off at midfield, giving their offense a chance as the beginning of the 3rd quarter was underway. The Warrior offense began with two positive plays, but two costly penalties took them back before midfield in a 1st and 42 situation. The Warriors could not overcome the Indian defense and were forced to punt the ball away. The Indians began at their 20-yard line and got an immediate first down thanks to a 20-yard pass from Scott to Faulkner. The Indian offense would battle down the field for the next five minutes setting up a 4-yard rushing touchdown by Scott, making the score 49-28 with two minutes left in the 3rd quarter. The Indians squibbed the kick to avoid a runback and the Warriors picked up the ball at the 45-yard line. Wilson found a hole and rushed to the endzone, but it would not matter as a costly holding call against the Warriors voided the score. The quarter would come to a close with the Warriors in possession of the football.

The Indian defense led by #34 Dakota Bennet frustrated the Warrior offense, but they kept pushing to get the ball down the field. The Warriors got to the 1-yard line and Fowler was able to power through for the touchdown, making the score 49-35 Indians leading. The Warriors kicked the ball back to the Indians who fumbled the catch and ended up in a difficult field position at their 7-yard line. Sullens was able to rush through the Warrior defense for 31 yards getting the Indians out of their red zone. A couple of plays later, Scott had a huge 47-yard run for a touchdown making the score 56-35, putting the game out of reach for the Warriors as there were only eight minutes left in the contest. The Warriors got the ball back but had not only the Indian defense to overcome but also the clock. The Warrior’s offense was able to get into the red zone but could not come up with a score as they turned the ball over on downs at the 5-yard line. Scott and the Indian offense kept the ball on the ground for the rest of the game as they waited for the clock to run out. The game clock would run out and the Indians were victorious on the road once again as they beat the Warriors 56-35.

The Lumpkin County Indians are now 3-1 in the region putting them in second place just behind the 5-0 Dawson County Tigers. The two regional leaders will meet next week at the Burial Grounds in Dahlonega for a huge matchup that will determine the winner of Region 7AAA.