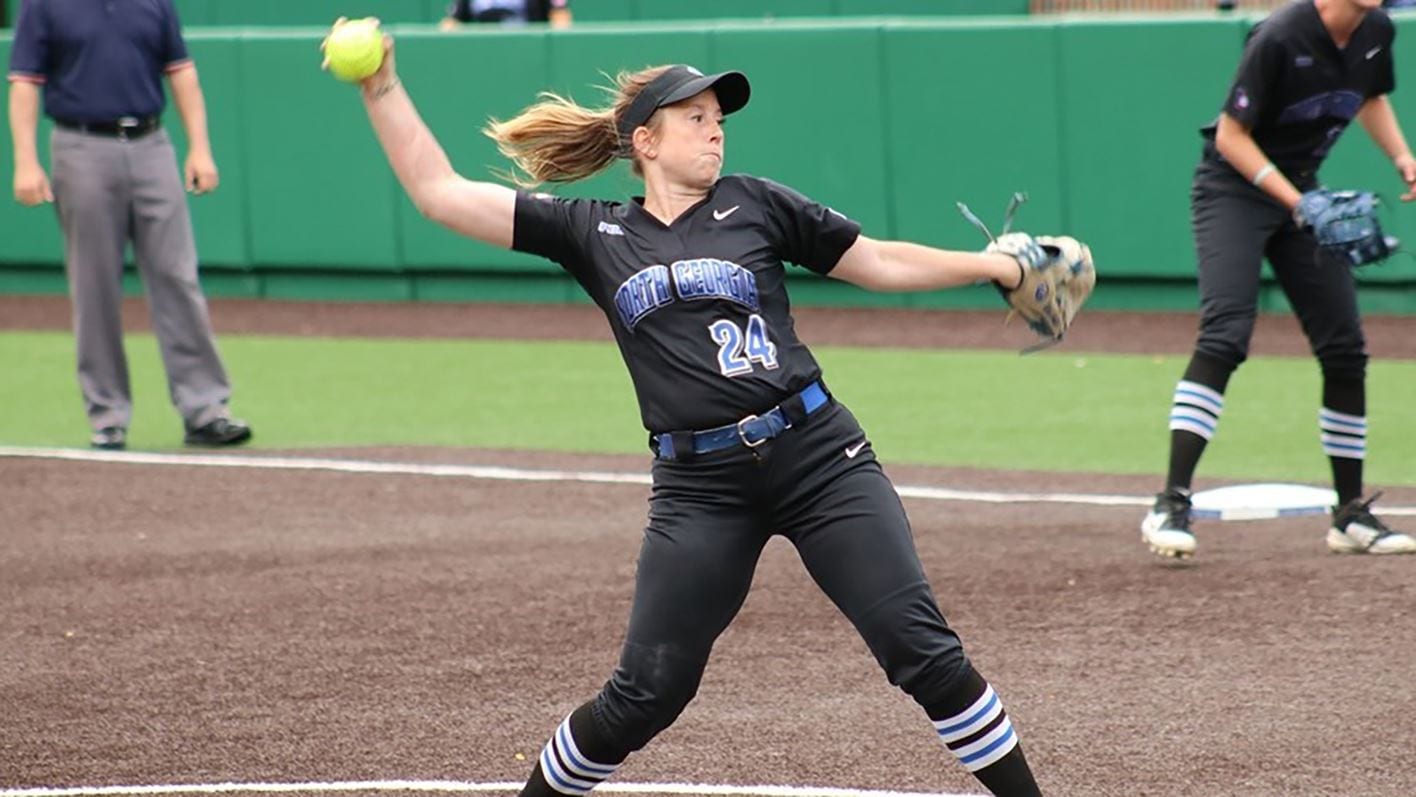 DAHLONEGA – A six-run sixth in game one was the turning point of the doubleheader as the No. 2 University of North Georgia softball team swept No. 16 Southern Indiana Saturday afternoon at Haines & Carolyn Hill Stadium at Lynn Cottrell Park.
GAME ONE – UNG 8, USI 3
Rachel Martinez got things started for the Eagles with a solo homer to left in the top half of the first inning. North Georgia answered in the second inning on a two run double from Madison Simmons that put the Nighthawks up, 2-1. USI retook the lead with a two-run shot from Alissa Webb to left field to push Southern Indiana up, 3-2.
After three scoreless innings, the Nighthawks got back on the scoreboard in a big way with Simmons retaking the lead on a two run bomb to straight away center. After a Shelby Hammontree RBI single to left, Gracie Mixson hit a three run blast to left to bring the game to its final score.
Kylee Smith (3-0) earned the win, fanning 10 in a complete game effort.
GAME TWO – UNG 8, USI 1
The Nighthawk bats got hot early in the second half of the top 25 twinbill, scoring five in the second inning, all of which were unearned. Two UNG runs came across on the Eagle error before Olivia Sinquefield cleared the bases on a single to right field to make the score 5-0.
Webb pushed the lone Eagle run across in the third on a single up the middle before North Georgia scored the final three in the sixth, two on a Madison Henry single through the left side.
NOTES
– Hammontree and Mixson each finished the day 3-for-7, while Margaret Simmons went 3-for-6.
– The Eagles struck out 18 times in the twinbill while UNG struck out just four times in 14 innings.
NEXT UP
The Nighthawks will take on Wingate tomorrow in a doubleheader starting at 11 a.m. at The Hill. 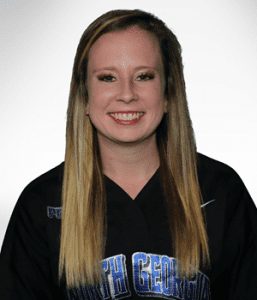 Smith, who is capturing her fourth NFCA weekly honor, was dominant in No. 9 North Georgia’s trip to Florida. The senior righty posted a 3-0 mark with three one-hit shutouts and 45 strikeouts in 23 innings of work against Sunshine State Conference opponents. Against Nova Southeastern, she fanned a season-high 16 with one walk. Prior to that, Smith sat down 15 Barry Buccaneers without issuing a free pass. Her third shutout came in the trip’s finale at Palm Beach Atlantic in which Smith struck out 10 and did not walk a batter. For the week, the 17-time Peach Belt Conference Pitcher of the Week posted a 0.00 ERA and held her opposition to a .054 batting average.

The Nighthawks will be back in action Saturday against No. 7 Lincoln Memorial at 1 p.m.

FORT LAUDERDALE, Fla. – Kylee Smith threw another one-hitter, fanning 16 batters along the way, as the No. 12 University of North Georgia softball team split a Friday night doubleheader with Nova Southeastern. Along the way, Smith struck out her 1,000th career batter.

Smith struck out the first five batters she faced as both pitchers fooled batters through the first three innings. North Georgia finally got on the scoreboard in the fourth, taking advantage of a Shark error to take the 1-0 lead.

UNG doubled its lead in the next inning, using another Nova Southeastern error to push the lead to 2-0. That proved to be enough for the Nighthawks as Smith fanned six of the last nine outs to improve to 7-1.

North Georgia got on the board early in the nightcap off a Kaylee Womack single that scored Mariah Wicker. The Sharks answered in the third inning, scoring on a squeeze bunt to tie the game up, 1-1.

Nova Southeastern scored the game winner in the sixth inning on an infield single. The Nighthawks were shut down in the batter’s box in the final innings, failing to find a base runner in the final three innings.

NOTES
– Smith gave up just one hit and one walk along the way.
– Womack was 2-for-6 in the twinbill.

NEXT UP
UNG will battle against Palm Beach Atlantic on Sunday with first pitch of the doubleheader at noon. 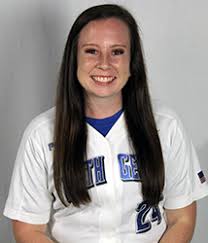 DAHLONEGA – With an 8-0 win in the opener, the University of North Georgia softball team claimed the 1000th program win and followed it up with No. 1001 in a 4-0 win over Southern Wesleyan to complete the doubleheader sweep Thursday at Haines & Carolyn Hill Stadium at Cottrell Park.
GAME ONE
Kylee Smith tossed a no-hitter, striking out 12 along the way as North Georgia cruised to the five-inning win. Margaret Simmons got things started with a double down the line in left in the second to plate the go-ahead run. Simmons then scored from second on a Cheyanne Mosteller sacrifice bunt to put UNG up, 2-0.
The Nighthawks scored four more in the third, starting by walking in a run and scoring on a fielder’s choice. After adding a run on a passed ball, Mosteller doubled to score the fourth run of the frame. The top of the lineup got into the scoring column in the fourth on a Kaylyn Anthony RBI double and a Jenna Goodrich RBI single to push the game to the eight-run margin.
Smith won her 100th game of her career, improving to 3-1 on the year. She only threw 65 pitches in the contest.
GAME TWO
The Nighthawks wasted no time getting on the scoreboard, pushing across a run in each of the first three innings. In the first, Shelby Hammontree doubled down the left field line to plate Mariah Wicker. In the second, Kaylee Womack earned a RBI single before Wicker homered to left center in the third.
North Georgia scored the final run of the game in the sixth inning on a passed ball. Southern Wesleyan got their first hit of the twinbill in the fifth inning and got two runners on before Laken Chambers got out of the jam.
Chambers earned her first win of the season, giving up just two hits while striking out two.

NOTES
– North Georgia started play in softball in 1997. The Nighthawks claimed 1000 wins in just over 23 seasons.

– Wicker and Simmons both went 2-for-4 with three runs scored on the day.

NEXT UP
North Georgia hosts the Cottrell Foundation Loyal Blue Classic this weekend with play starting tomorrow at noon. UNG plays for the first time in the tournament Saturday at noon against Gannon. 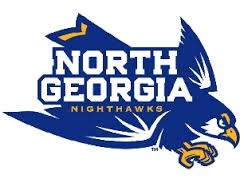 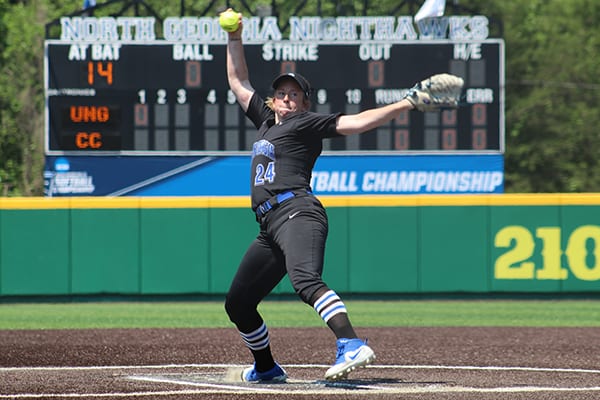 LOUISVILLE, Ky. – Ten finalists have been selected for the 2019 Schutt Sports/NFCA Division II National Player and Pitcher of the Year awards, and University of North Georgia pitcher Kylee Smith is on the list for a third straight year.

It marks the fifth straight season a student-athlete from North Georgia has been named to the list and the third time for the junior who won the Player of the Year award a year ago. This is the first year that a Pitcher of the Year will be awarded.

Other former Nighthawks that have been on the finalist list include Courtney Poole, who won the inaugural award in 2015, and Stephanie Hartness in 2016.

The two award winners will be announced on May 30 following the conclusion of the Division II Softball Championship. 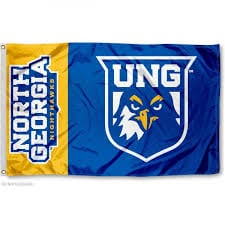