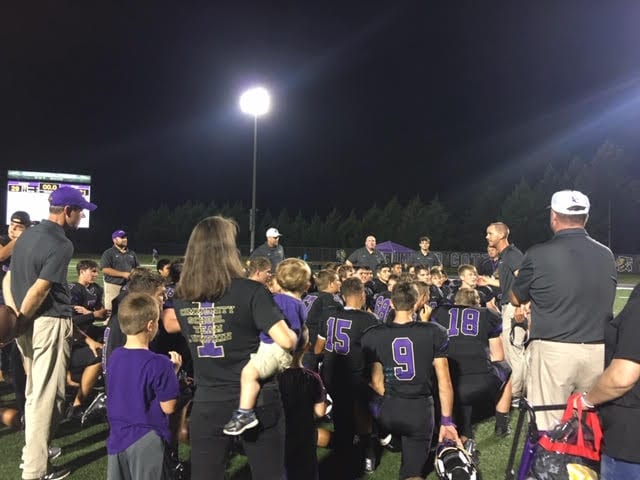 The Lumpkin County Indians football had plenty to celebrate Friday night. Following their first season win over the Gilmer Bobcats, the Indians ran from midfield to the sideline to thank the band, and their fans, for their unending support.

It has been a hard fight for the team to get here. The Indians suffered three straight losses to begin their season to East Jackson, White County and Jackson County. But being back on their home turf, the Indians were hungry for a win, and ready to fight for one.

This victory was also the first for Coach Caleb Sorrells in his role as the new head coach. Sorrells was named head coach earlier in the summer, and it his first time in a head coach’s position. 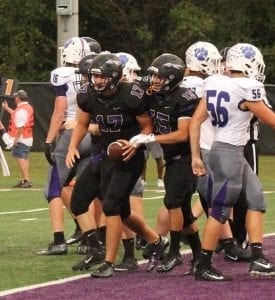 Runningback Drew Allison after scoring the Indians first touchdown of the night.

Lumpkin County scored first during their first possession after a ten yard touchdown carry from Allison. The Indians defense held the Bobcats to a quick four and out, then regained possession at the Bobcats 49 yard line.

The first half of the game was riddled with penalties, and the Indians experienced that during their next drive. The offense drove down to the 24 yard line before they were hit with two penalties, one a personal foul and one for delay of game, to push them back to where they nearly started. Kirk punted from the Bobcat 43 yard line, and the Bobcats took over on their 21 yard line.

Gilmer went on a long drive that resulted in a touchdown to tie the game, and the Indians offense went back to work. Dowdy broke through the line with a huge 54 yard touchdown carry to bring the Indians ahead 13-7 with 4:37 left in the half. Lumpkin County got in field goal range during their next drive, and a 22 yard kick by Will Ramirez was good. The Indians held a lead of 16-7 going into the half. 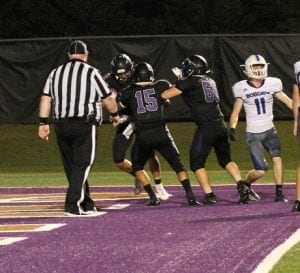 The Indians celebrate another touchdown by BoJack Dowdy.

Gilmer went for an onside kick and got it, and scored again with a quarterback keeper. The Indians were still ahead 23-21, but weren’t giving in quite yet. Dowdy scored one more time for the Indians after a two yard carry to make the score 29-21. From there it was a matter of letting the clock run down so the Indians could begin their celebration.

Lumpkin County is going into a bye week this week before they kick off region play against the Dawson County Tigers. They will host the Tigers at Cottrell Stadium on the 27th.

Baseball Snaps WSSU’s Winning Streak With 4-2 Win
4/20/2018 | Baseball | Box Score
DAHLONEGA – Despite a ninth-inning threat from the Rams of Winston-Salem State, the University of North Georgia baseball team was able to hang on to a two-run lead as Parker Morrison struck out the side with runners on the corners to win game one of the series, 4-2, Friday night at Bob Stein Stadium.

Winston-Salem jumped on the Nighthawks in the third to get a lead. A lead off single from Wellington Guzman followed by a sacrifice bunt from Nick Williams, then a homer over left center from Randy Norris put the Rams up 2-0.

Behind in the score, North Georgia fought back in the bottom of the frame. William Mapes led off with a bunt to the first baseman, diving safely into the bag to board a runner for UNG. Chase Sudduth drew a walk to put runners on first and second for Andres Perez, whose RBI single to left scored Mapes and cut the lead in half, 2-1. A wild pitch would allow Sudduth to score and tie it up.

A RBI double from Nick Clarno to score Jake Arnold, who reached on a double to left, clinched the lead for the Nighthawks in the fourth frame. Then in the sixth, Arnold’s hot bat sent a shot over left to add an insurance run and extend the lead, 4-2.

The Rams were not through as they fought back in the ninth. A leadoff single from Emilio Abreu brought the tying run to plate for WSSU, Cole Parks. Parks blasted a ground single through the right side to board the go-ahead for the Rams, as Abreu advanced to third on the play. But despite the effort, Morrison sat the following three batters down in order to close it out for the Nighthawks.

– With this win, Cade Heil improved to 6-5 on the season, WSSU’s Seth Reeves (3-3) drew the loss, and Morrison earned his 10th save of the year. Heil also had three pickoffs in the contest.

NEXT UP
North Georgia will be back at The Steiner tomorrow for game two of the three-game series against Winston-Salem State. First pitch is set for 3 p.m. 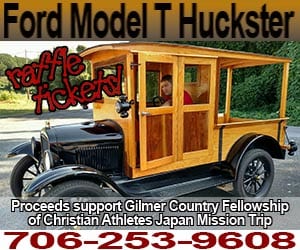 The Gilmer County chapter of the Fellowship of Christian Athletes is selling tickets for a chance to win a restored 1927 Ford Model T Huckster truck. The proceeds collected from the raffle will be used to cover the cost of a mission trip to Japan next summer. 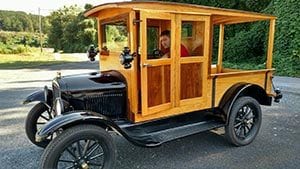 FCA Area Director Reece Sanford said the vintage vehicle was donated by a local family in Blue Ridge to help send 12 to 17 coaches and athletes on the mission trip.

He said 500 tickets will be sold at $100 each with the drawing scheduled Dec. 17th, during a special FCA all start football game involving seniors from Fannin, Gilmer, Pickens, Towns and Union counties. The game will be played in Blairsville.

Queen said the old truck runs well and had been in a downtown Blue Ridge location for a number of years before being restored.