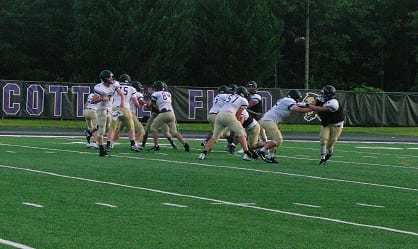 Lumpkin Indians football is officially underway for the 2019 season- and so is the beginning of a new style of offense for the team.

Under the direction of new head football coach Caleb Sorrells, the Indians are upping their passing game. Fans got a glimpse of what this new offense will look like at the annual Meet the Indians event Friday night.

The event started with an introduction to the 2019 Indians team, immediately followed by the Purple and Gold scrimmage game. The game was divided into the normal four quarters, but with a shortened time of ten minutes per quarter. 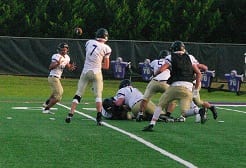 A pass thrown by quarterback Tucker Kirk in the Lumpkin County Purple and Gold game on Friday.

Coach Caleb Sorrells said of the passing game, “We threw the ball well. It’s a building process and so we’re still pretty simple, and we’ll just get good at what we can do and then begin to build once we master the basics.”

The Meet the Indians event also featured an introduction to the seniors on the Lumpkin Indians cheer squad in between the first and second quarters. The Lumpkin County Band of Gold performed a shortened version of their halftime show, and the Dahlonega Nugget Challenge saw three of the local newspaper’s reporters take on three Indians in a pass, punt and kick competition.

“The kids were excited, it was a good atmosphere [and] a lot of people came out,” said Coach Sorrells. “It’ll be good to go back and really evaluate where we are moving into our scrimmage week.”

The Indians will face Towns County in their scrimmage next Friday. Watch the full post-game interview with Coach Sorrells by using the link below!