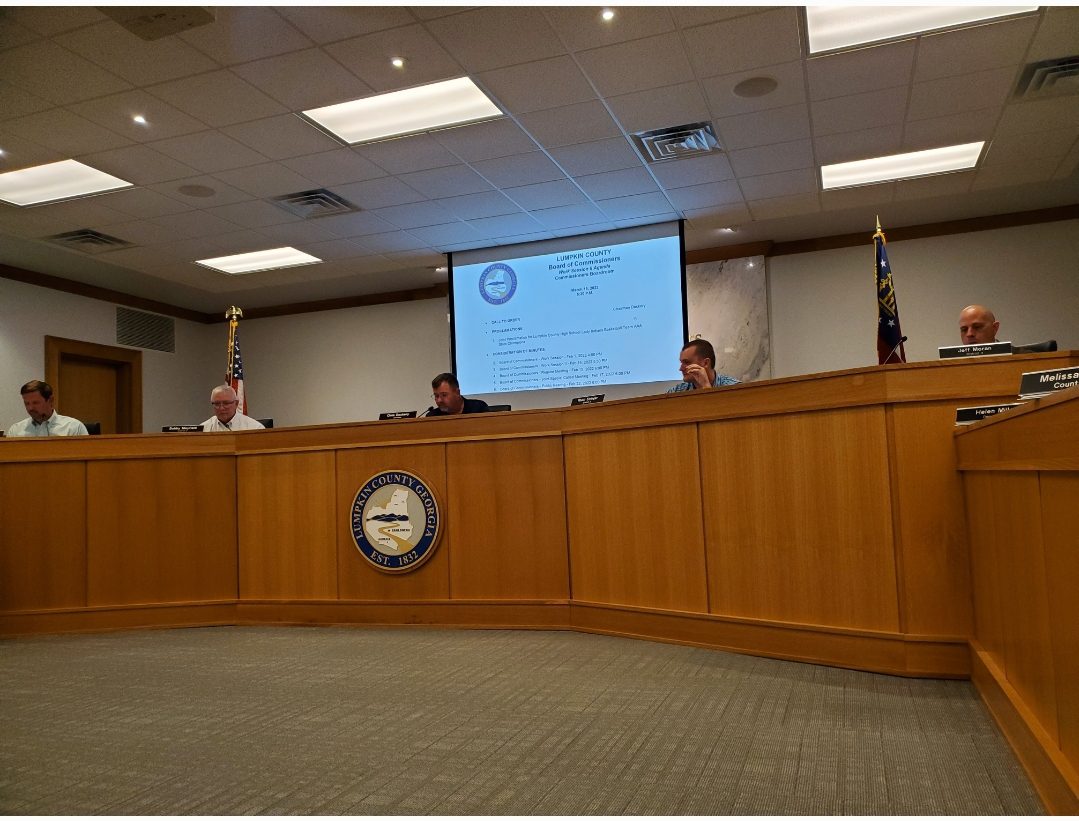 LUMPKIN COUNTY, Ga.- The Board of Commissioners is beginning to seek bids for inmate health contracts after the current contract was raised.

The board also approved funding for a program manager for the broadband infrastructure grant project. They also entered into a mediation compromise with The Complete Combatant, LLC. The board also is continuing the search for a location for the new animal shelter.

The commissioners have been working with Finance Director Abby Branan to work out a new contract for inmate health. The current contract with CorrectHealth has gone up to $60,000 over the previous contract. To review the talks the board has had so far visit https://lumpkin.fetchyournews.com/2022/03/02/board-discuss-possible-locations-for-the-new-animal-shelter/. 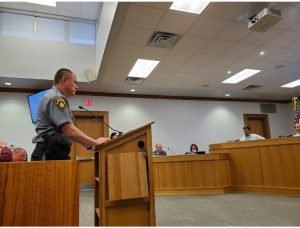 CorrectHealth has agreed to a month-to-month contract while the commissioners start a bid process. The bids are due by Apr. 4 and Branan will have a contract for the board’s approval by the second meeting in Apr.

Development Authority Director Rebecca Mincey brought the commissioners a request for funding for a program manager for the broadband infrastructure grant project. Mincey has been working with the state and NTIA on the infrastructure project. The board approved the use of ARPA funds for the project.

“I’d like to publicly tell Rebecca Mincey how thankful we are for her hard work on these two grants, these are very competitive grants for broadband and infrastructure improvement in Lumpkin County. Not only were we the recipient of a State grant but also a Federal grant and it’s just unbelievable the amount of work that goes into that,” stated Chairman of the Board Chris Dockery. 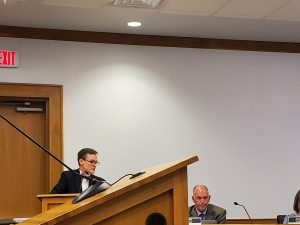 Ken Jarrard while explaining the compromise to the board.

The terms state that the only firearms that will be allowed will be pistols. The times for operation will be 10 a.m. to 6 p.m. two days a week, one weekend per month, and two Fridays per year. This does not include the owner’s personal use, but it does include charity usage. They are also required to use noise baffling panels that once in place the county staff will be responsible for reviewing, the company will be in charge of maintenance.

There was public comment after the meeting where serval citizens expressed their concern and disappointment with this action. The board heard out the concerns of the citizens. 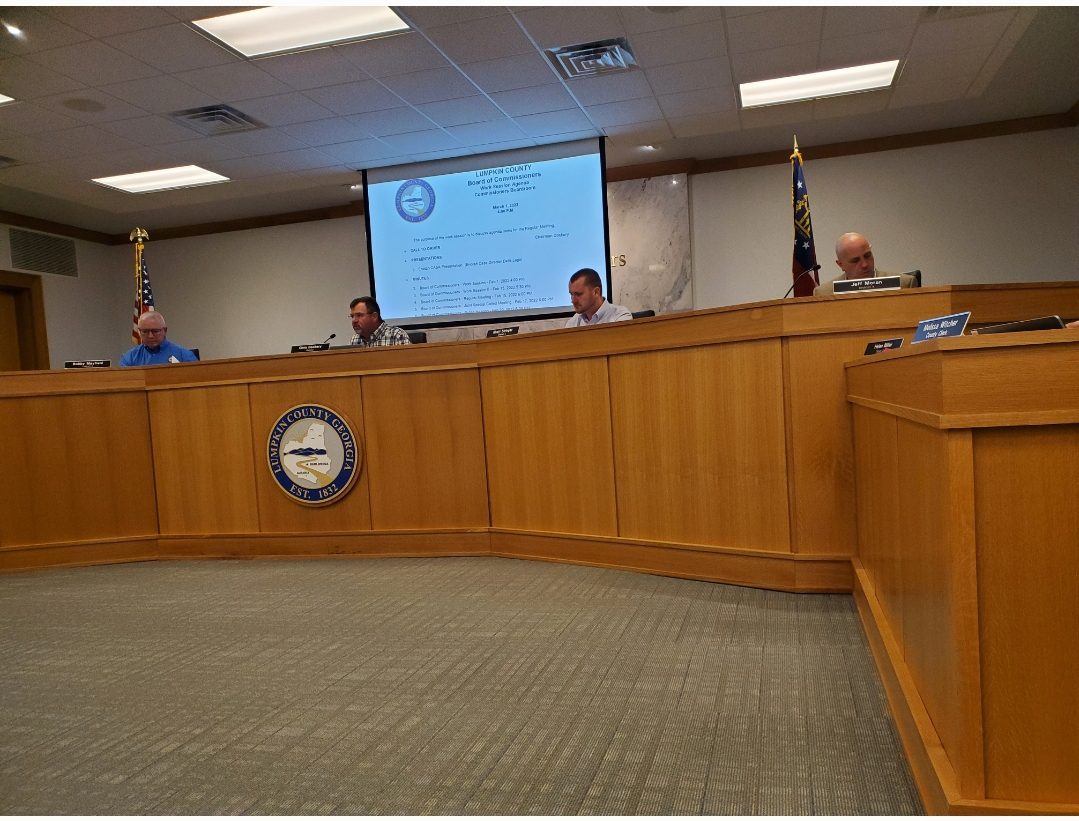 LUMPKIN COUNTY, Ga.- Director of Special Projects Ashley Peck presented the board with three options for possible locations for the new animal shelter the county is building.

The board also followed up on the inmate medical contract that they talked about last month. Director of Development Authority Rebeccas Mincey brought the board an update on the broadband infrastructure grant project.

Peck along with other members of staff have found three county-owned properties that were presented to the board for the new shelter. There are two locations in Blackburn Park and one location near the transfer station that is up for consideration. The estimated cost for building the shelter is $1,202,000.00. 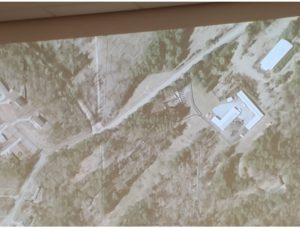 The first option in Blackburn park offers both room for expansion in the future and room to house large animals for a short time. There would be easier construction in this area which also means a shorter time for the project. It is the cheapest option and is 541 feet away from the closest neighbor.

The second option in Blackburn is the current site of the County’s Vegetative Debris Management Area. If chosen the county will have to move the site to another location and that will have to be approved by FEMA. This also offers the same room for expansion and housing for large animals. 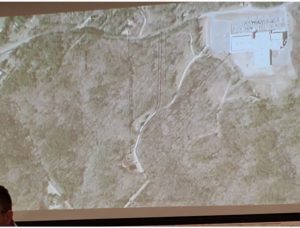 The closest house to the site is 1,353 feet away, however it is also located behind Blackburn Elementary. In order to access the site, there is a need to build a new road and that will cost $323,775 of TSPLOST money.

Finally, the option by the transfer station is a more difficult site to build and there is little room for expansion if needed in the future. There would also be the need to build a 650ft road on the site. It will cost $254,154 to build. 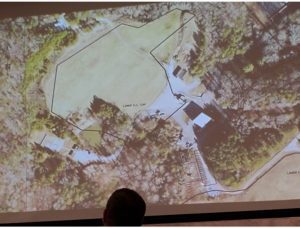 There is an additional cost for screening, security fencing, utility, and water and sewer. All of that would bring the cost of the project up to $1,537,866.00. There are also downsides to this location’s proximity to both a firing range and the transfer station.

Residents of the neighborhoods surrounding Blackburn park expressed their concerns again to the board after the meeting. If the board decides none of these locations are what they are looking for there are other options the county can pursue. The board will make a decision at their regular meeting on Mar. 15 at 6:00 p.m. To view the agenda before the meeting visit http://lumpkincountyga.iqm2.com/Citizens/Default.aspx.

“I’ve taken notes on what everybody said and we certainly take those seriously and appreciate your comments and taking the time to be here. We want to do what’s best for all of Lumpkin County and it’s tough when you come to these situations and you’re trying to improve the services for the county,” explained Chairman of the Board Chris Dockery.

Finance Director Abby Branan reviewed how the negotiations with CorrectHealth for the inmate health contract. When Sheriff Jarrard brought the contract amendment at the last meeting the board asked staff to go back and try to negotiate with the company for a different rate than what they offered. To review that meeting visit https://lumpkin.fetchyournews.com/2022/02/16/board-reviews-land-use-revisions-update-and-extends-moratorium/.

The company stated that they could not go lower than what they have already stated. That price is a $60,000 raise over the previous contract. The board told Branan to go back and see if they would agree to a month-to-month payment system in order to give the board time to bid out to see if there are lower options available.

“We may find out if they participate in the bid process that they do have the best bid out there but until we do it we won’t know,” stated Commissioner District 2 Bobby Mayfield.

Mincey informed the board that for the broadband infrastructure project they have also received the federal grant as well which is another 8 million for the project. They have already been awarded 3.7 million from the state. There’s still more work Mincey has to do before she brings the full report back to the board. 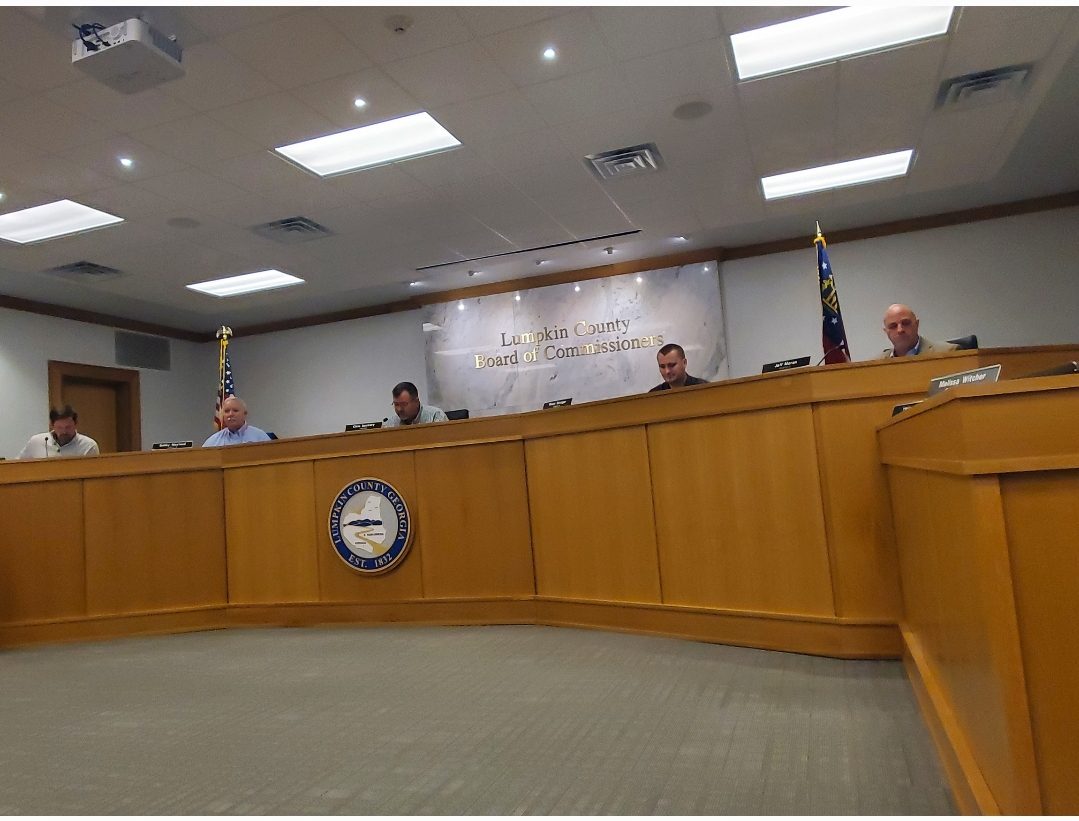 LUMPKIN COUNTY, Ga. -After much debate and changes the board of commissioners approved the amendment to the character area map in their meeting on Jan. 18.

The board also gave staff the go-ahead to start planning the new animal shelter project and the board heard some concerns from the public on the matter. Lastly, the board recognized Lumpkin County employees for their years of service.

The board began discussing the change to the character area map for 283 Red Oak Flats Loop, Dahlonega, GA 30533, parcel 098-
015 in Dec. This change was to make the area an industrial park for use of the business Amicalola Propane. The board voted to table the decision to give staff more time to outline conditions and definitions for the amendment.

At the work session on Jan. 4, the board discussed more changes they wish to see before moving forward with approval. To view that information visit https://lumpkin.fetchyournews.com/2022/01/05/board-continues-to-discuss-character-area-map-amendment/. At the meeting on Jan. 18 the board took action on the character area map amendment and they voted to approve it with conditions.

There were ten conditions approved some of those are 1. only light industrial and lesser uses shall be allowed, 2. no noise shall be audible between the hours of 6:00 p.m. through 7:00 a.m., 3. no dust shall leave the property, and 4. no order or smell shall leave the property. To view, the full list of conditions please go to http://lumpkincountyga.iqm2.com/Citizens/FileOpen.aspx?Type=1&ID=1570&Inline=True. The conditions begin on page 36.

Special Projects Director Ashely Peck brought the board a list of what staff needed to begin planning on the new animal shelter. Peck asked the board for an owner’s representative, an architect for the project, and a construction manager at risk build model. The board gave Peck the nod to go forward.

” The owner’s representative of course this is the model we used for the library and I think it ended up saving the taxpayers a lot of money by doing that so I would be in support of that, obtain the services of an architect I think we should certainly look at that we’ve got to have a good plan going forward, and then the authorization of the construction manager at risk build model I think that gives us the most control and the best opportunity to save money,” explained Chris Dockery Chairman of the Board.

Three citizens came forward to express concerns about the proposed location of the shelter and the impact that it will have on them and their property values. The board heard the concerns and invited the community to continue to work with them as the project moves forward. 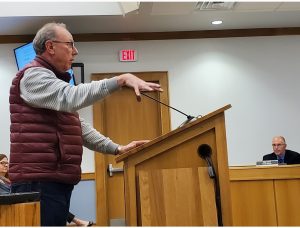 Will Howell was one of the citizens that expressed concern about the animal shelter project. 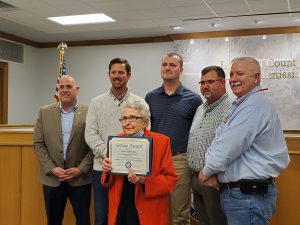 Maire Satterfield received her recognition for forty-five years of service and the board of commissioners. Left to Right Jeff Moran, Tucker Greene, Rhett Stringer, Chris Dockery, and Bobby Mayfield.

The board also recognized its employees that have been with the county for five, ten, fifteen, twenty, and forty-five years of service. Not all employees that received the recognition were present at the meeting however Mrs. Maire Satterfield was present. Satterfield has worked with the Lumpkin County Sherriff’s office since 1976.

“Since 1976 this dedicated employee has served the citizens of Lumpkin County, it amazes me that she’s still going strong and I can tell you and I think Stacy Jarrard would tell you the same thing he’d be lost without her, she is a wealth of institutional knowledge and just certainly a great person,” praised Dockery. 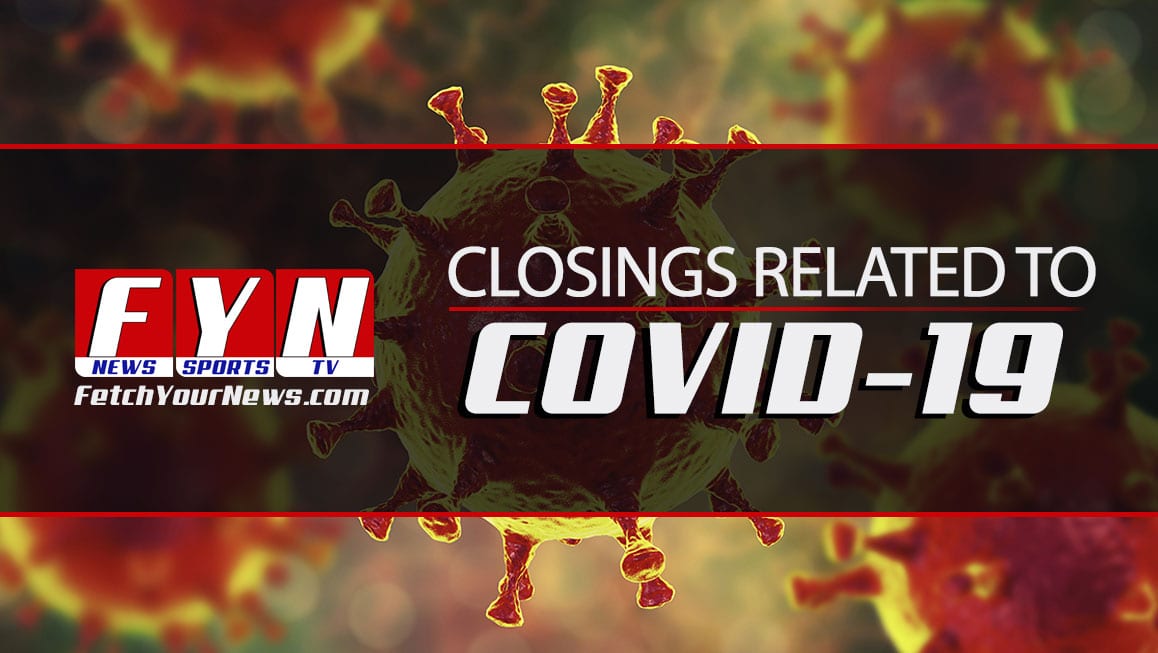 Lumpkin County has created a page for virus updates)

The State of Georgia has announced a hotline that is staffed and ready to answer Coronavirus (COVID-19) questions.  Please call 1-844-442-2681.

What do I do if I feel sick?  If you have a fever and cough or difficulty breathing, these steps will help you find the care you need and limit the spread of Coronavirus (COVID-19) in our region:

Are they able to test? NGHS has the ability to coordinate testing at some of our locations. Please call your doctor’s office or urgent care clinic for advice about whether testing is right for you. Recently we implemented a new E-Visit specific to the Coronavirus. Just visit www.ngpg.org/evisit-info for instructions about how to complete an E-Visit from the comfort of your home.

Should I be wearing a mask? It is important for everyone to remember that the CDC does not recommend face masks for the general public who are well as a protection from COVID-19 or other respiratory diseases. If people stockpile masks at their homes out of concern, they could inadvertently prevent healthcare facilities from getting the supplies they need for ill patients and the staff treating those patients. Instead, good hand hygiene – washing hands for at least 20 seconds – is very important and cough etiquette – covering your mouth while you cough or sneeze and then washing hands or using sanitizer– is Highly Recommend